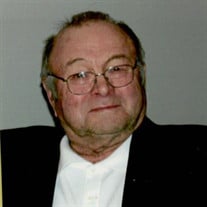 William (Bill) Louis Woita was called to the Lord on August 10, 2020 at Ridgewood Care Center in Seward, Nebraska. Memorials: Ulysses Fire Department, Immaculate Conception Church or Dwight Legion Post #110. Immediately following the burial, there will be celebration of Bill's life at the Ulysses City Park and Community Hall. All are welcome to attend and are reminded to please keep social distancing in place. Following the CDC COVID-19 guidelines, we will comply with social distancing seating and limited room capacity. Bill was born on September 29, 1940 at Prague, Nebraska to William J. and Ella(Focher) Woita Sr. He was baptized in Plasi, rural Saunders County. Bill was two years old when the family moved on a farm in the Ulysses/Dwight area. He attended District 81 county school and two years at Ulysses grade school. He graduated from Ulysses High School in 1958. Bill participated in basketball & track. He farmed, raised cattle & hogs and milked cows. He worked various jobs in the F.S.A. office in David City. He belonged to the NFO, local Co-ops and the Saunders County Feeders. He was also in military reserve with the Seward National Guard from 1963-1969 and reached the rank of E-6. He was a current member of the Dwight Legion Post #110. Bill was a member of the Ulysses Fire Department until retirement. He enjoyed hunting and fishing, especially deer & elk. Bill played guitar with various bands and had a local band called " The Old Man & the Boys +One". Bill especially enjoyed polka music and Czech singing. He also was known for his "Bill's Dills" pickles and loved pets and gardening. Bill married Margaret Rerucha on January 28, 1967 at St. Francis Church, Center and to this union three children were born. Bill is survived by his children, Suzanne Rezac (fiance, Craig Matulka) Warren(Shelly)Woita and RaNae(Jeff) Blum, sister, Doreen(Jerome)Novacek, 8 grandchildren: Shane, Lauren & Tristan Rezac, Kenzie Martin, Delaney & Mason Woita, Natalie & Kailey Blum, one great-grandchild, Brantley Martin and several nieces and nephews. He was preceded in death by his parents, his wife, Margaret on Dec. 5, 2017, brother and sister-in-law, Don & Carolyn Woita in 2018. God Bless everyone who had anything to do with my life and my funeral. Bill.

The family of William "Bill" L. Woita Jr. created this Life Tributes page to make it easy to share your memories.

William (Bill) Louis Woita was called to the Lord on August 10,...