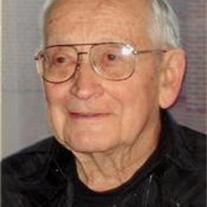 Wesley M. Henderson, 93, of Seward, formerly of Rising City, died Saturday, October 22, 2011 at Ridgewood Care Center in Seward. Service of Celebration and Rememberance will be Wednesday, October 26, 2011 at 10:30am in the Rising City United Methodist Church with Rev. Betsy Galloway-Carew and Rev. Glenn Hubbard officiating. Burial will be in Circle Mound Cemetery. Family will greet friends on Tuesday, from 4-7pm at Chermok Funeral Home. Additional viewing will be Wednesday, from 9:30 until 10:30am at the church. Memorials may be given In Care of the Family. Wesley M. Henderson was born on January 15, 1918 to Willard and Dalma(Jennings)Henderson on the farm near Rising City. He attended the Rising City public schools and graduated from Rising City High School in 1935. After graduation, he worked at an auto repair shop in Lincoln for several years before returing to the Rising City area to farm. Wesley met Grace Bonnie and they were married on February 20, 1938. They were married for 57 happy years and two sons were born to this union. He continued to farm while operating Henderson Automotive Sales and Service on the farm. In 1972, he moved his business into Rising City, where he also established a motorcyle dealership. Wes owned and worked in his shop until he "retired" from ownership, but not from repair work. He was known as the "go to" guy whenever anything needed to be repaired, fixed or put back together. His wife, Grace passed away in 1995. Wesley enjoyed building and fixing cars and motorcycles. he built several championship stock cars in the 50's and 60's and always had a strong interest in motorcycles. He rebuilt and restored many throughout his lifetime. Two years later, Wes reconnected with Thelma Samuelson. He and Thelma were childhood country school sweethearts. When fate brought them together they were able to find happiness and were married on June 7, 1997. They lived in Utica for 14 years and up until 2010, worked at the Pioneer Seed Corn Plant in York during harvest time. Wes also loved to dance and on Sunday's would frequent the local ballrooms. He also loved to travel, going up to Sturgis and sightseeing the country on his own motorcycle. Wes is survived by his wife: Thelma of Seward, sons: Jay(Polly) of Valparaiso; Randy(Doris)of Rising City; Step-son: Michael(Susie)of Eagle; Step-daughter: LuAnn(Marshall)Bruns of Waco; 4 grandchildren: Dan of Lincoln; Scott(Kelly) of Kansas City, KS; Jamie of Philadelphia and Jesse(Gail)of Sturtevant, WI. Great-grandson: Grant Henderson Step-grandchildren: Joshua Samuelson, US Army- Korea; Rachael(Andy)Carlson of Grand Island; Sara(Logan)Botzman of Auburn, AL; Grant(Holly)Bruns of LaVista; and Brittany and Katie Bruns both of Waco. Step-great-grandchildren: Emma, Mary and Reese Carlson. He was preceded in death by his parents, his first wife Grace, and one brother: James Henderson.

Wesley M. Henderson, 93, of Seward, formerly of Rising City, died Saturday, October 22, 2011 at Ridgewood Care Center in Seward. Service of Celebration and Rememberance will be Wednesday, October 26, 2011 at 10:30am in the Rising City... View Obituary & Service Information

The family of Wesley Henderson created this Life Tributes page to make it easy to share your memories.

Send flowers to the Henderson family.