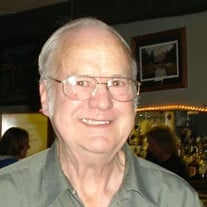 Wayne E. DeLaet, 73, of Rising City, passed away August 1, 2016 at Brookestone Acres in Columbus, NE. Wayne DeLaet was born January 27, 1943 to Joe and Charlene(Young) DeLaet, in Kearney, Nebraska. He graduated from Kearney High School in 1961, then joined the United States Navy and served during the Vietnam War. On July 7, 1971, Wayne and Betty(Einspahr) were united in marriage, and 4 children were born to this union. Wayne enjoyed woodworking, fishing, and playing cards. His grandchildren loved when he got down on the floor to play with them. He is survived by his wife: Betty, of Rising City; children: Tammy Lance, of Columbus, Donna (Ron) Kreitman, of Norfolk, Cindy Lesiak, of Norfolk, and Scott (Lacey) DeLaet, of Platte Center; brothers: Ronald (Juanita) DeLaet, Donald DeLaet, and Jim (Doris) DeLaet; sister: JoAnn Wuehler; 7 grandchildren: Ashley, Robin, Megan, Courtney, Jessie, Taj, and Eric; 6 great-grandchildren; and numerous nieces and nephews. Wayne is preceded in death by his parents; sister: Barbara; and sister-in-law: Janet.

The family of Wayne E. DeLaet created this Life Tributes page to make it easy to share your memories.

Send flowers to the DeLaet family.