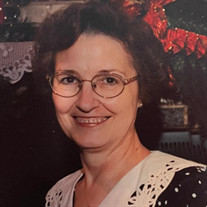 Virginia Zegers, 76, widow of Joe, of David City died Saturday, November 20, 2021 at Bryan West Medical Center in Lincoln. Memorials can be directed towards St. Francis Catholic Church at Center. Virginia was born on March 16, 1945 to Richard and Rose (Samek) Kozisek in David City. She graduated from Aquinas Catholic High School. On June 26, 1965 she married Joseph L. Zegers at St. Francis Catholic Church at Center. Virginia worked various jobs in the area and ultimately found her work family at KV Vet Supplies from the time they opened until their closing when she decided it was time for retirement. Virginia enjoyed the simple things in life, one of which was walking around David City, she had calculated that over the last 26 years she had walked over 30,000 miles. She loved working in her garden and on her flowers, reading books, and thoroughly enjoyed spending time babysitting her grandchildren and great-grandchildren. Virginia also had a fondness for anything frog themed whether it was pots, figurines, or occasionally the real thing found on her walks. She is survived by her son Greg (Gae) Zegers of Newbern, North Carolina, daughter Nancy Thege of David City; grandchildren: Cody, Brooke, and Kaitlin Thege, Colten (Jennifer Shell) Thege, Greg Jr. (Alex) Zegers, Amber Zegers-Alvarez, Jessi (Michael) Zegers-Bloodworth, and Scott Muraud; great-grandchildren: Saddie and Gracie Alvarez, Alleigh and Austin Bloodworth and Paisley Jo Thege. Brother Gary (Jean) Kozisek of Gothenburg, NE; sisters Orletha Havlovic of David City and Pat Reisdorff of Osceola. Virginia is preceded in death by her parents, husband Joseph in 2009, son Daniel in 2018, and brothers-in-law Ray Havlovic and Don Reisdorff.

The family of Virginia Zegers created this Life Tributes page to make it easy to share your memories.

Send flowers to the Zegers family.