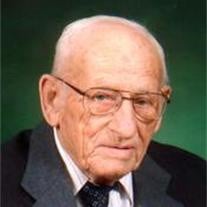 Victor E. Novacek, 92, of Bruno, died Sunday, September 8, 2013 at David Place in David City. A Memorial Funeral Mass will be offered on Thursday, September 12, 2013, 10:00am in St.Anthony de Padua Catholic Church, Bruno with Fr. Ronald Homes as celebrant. Inurnment of ashes will follow at St. Anthony's Cemetery, rural Burno. A Wake/Rosary will be held on Wednesday, September 11 at 7:00pm at the church. There will be no viewing as Victor was cremated. Memorials In Care of the Family. Victor E. Novacek was born on September 25, 1920 at Bruno, Nebraska to Frank and Margaret(Bruner)Novacek. He graduated from Brainard High School and entered the US Army in 1942. He married LaVerne Anderly on August 30, 1949 at Brainard, Nebraska. Three children were born to this union. He served as a Staff Sargent until his discharge in 1946. He worked as a US mail carrier, at the Butler County Assessor's Office, Spencer Foods in Schuyler, Butch Hein Poultry Farm and for Dale's Food Pride in David City. He was also a farmer for many years. Victor belonged to St. Anthony's Church, Bruno where he also served as a church board member. He was also on the Aquinas School Board when the school was established. He served on the Bruno School Board and was a member of the Rejda Legion Post of Brainard and the Knights of Columbus. Victor is survived by his wife: LaVerne, children: Greg(Deb)Novacek of Seward, Rick(Julie)Novacek of Brainard, and Leland(Cheryl)Novacek of Valparaiso. one brother, Leonard Novacek of Brainard; 7 Grandchildren:Brad(Martha)Novacek;Aaron Novacek;Rachel(Daniel)Houston; Chad(Stephanie)Novacek;Niki(Trevor) Zitek-Svoboda; Jamie(Shane)Johnson;Heather Novacek; 7 Great-grandchildren: Wyatt and Garett Houston; Isaiah, Cora, and Keaton Novacek, Kallie and Lucas Svoboda with two more great-grandchildren expected in March. He was preceded in death by his parents, one son, Victor Jr, one sister: Dorothy Bartunek and sister-in-law: Elsie Novacek.

The family of Victor Novacek created this Life Tributes page to make it easy to share your memories.

Send flowers to the Novacek family.