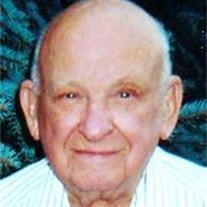 Vernon H. Oltmans, 94, of David City, passed away on December 5, 2013 at David Place. A Celebration of Life will be held at 1:00pm on Monday, December 9, 2013 at Chermok Funeral Home Chapel with Pastor Jack McDonald officiating. Inurnment will be at a later date. There will be no viewing or visitation, per Vernon's wishes, he was cremated. IN LIEU OF FLOWERS: Memorials In Care of the Family. Vernon Henry Oltmans was born on July 26, 1919 to Gerhardt and Olga (Otto) Oltmans in West Point, Nebraska. He moved to David City at age 5, and attended David City Public School. He was a jack of all trades. Vernon lived and worked at Wonderlick's Dairy from age 12-15 yrs, then worked at a Safeway Store from 1934-1944. During that time, he married his sweetheart Mary Jane Harper on October 2, 1939 at Dundee Presbyterian Church in Omaha. In June of 1944 Vernon joined the Navy and served until 1946. From 1946-1960, he owned his own grocery store "OK Market" with his good friend Don Kepner. He then owned and operated "Vern's Upholstery and Refinishing" before starting his own business "Vern's Guns" where he sold, built and repaired guns, and sold parts, ammo, and accessories until his retirement at age 89. Outside of work, Vernon enjoyed visiting with friends, woodworking, and spending time with his grandchildren and great-grandchildren. Vern moved into David Place with Mary Jane in January of 2011, where he resided until his death. He is survived by his daughter: Nancy(Gary) Riha of David City, daughter in law: Darlene Oltmans of Lincoln, 3 grandchildren and their spouses, 6 great-grandchildren, and several nieces and nephews. Vernon is preceded in death by his parents, wife: Mary Jane Oltmans on Sept. 10, 2013, one son: Larry Oltmans, and sisters: Alma Carter, Edna Kirby and Eileen Knott.

Vernon H. Oltmans, 94, of David City, passed away on December 5, 2013 at David Place. A Celebration of Life will be held at 1:00pm on Monday, December 9, 2013 at Chermok Funeral Home Chapel with Pastor Jack McDonald officiating. Inurnment... View Obituary & Service Information

The family of Vernon Oltmans created this Life Tributes page to make it easy to share your memories.

Vernon H. Oltmans, 94, of David City, passed away on December...

Send flowers to the Oltmans family.