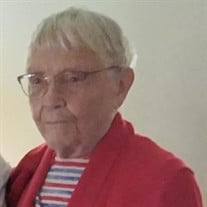 Verla E. Johnson, 93, widow of Lester, of David City died Tuesday, April 19, 2022 at Bryan East Medical Center in Lincoln. Per Verla's wishes, cremation will take place. Burial of ashes will take place at Ft. McPherson National Cemetery at a later date. IN LIEU OF FLOWERS: the family has asked that memorials be given In Care of the Family. Verla E. Johnson was born on January 16, 1929 to Frank and Ethel Olson in Holdrege, Nebraska. She attended school in Holdrege, where she met the love of her life, Lester Johnson. After they married, they farmed near Bertrand for several years and started their family there. They moved to Columbus in 1954. where she went to work at J.C. Penny and where they also ran a restaurant, doing many hours of cooking. They continued to grow their family of four boys in Columbus. In 1966, they moved to David City, where she worked at the Butler County Clinic and City offices until her retirement. She enjoyed ceramics, crocheting and gardening. She was very active in the American Legion Auxiliary. where you would see her selling poppies every year, regardless of the weather. She volunteered at the Bone Creek Museum and enjoyed visiting with all the people that came to see the artwork. Verla had a great deal of love for her boys, daughters-in-law, grandchildren and great-grandchildren. We were so fortunate that her final months were spent in Lincoln, so close to her family, where we could see her often. Surviving family members include: sons: Larry(Sandy) Johnson, Don (Connie) Johnson, Doug Johnson, Gene Johnson, grandchildren: Shauna (Tom) Rohn, Kurt(Carol)Johnson, Jennie(Tim) Bogosian, Leah(Mitch)Johnson, Hana(Mark)Maciolek, Marta(Eric)Maciolek, Great-grandchildren: Jordan and Corbin Johnson, Bradon Lowry, Pollux, Kinzie and Maple Maciolek. Special Friends: Robbyn Burns Johnson and Trudy Scott. She Was preceded in death by her parents, her husband, Lester, grandson, Clint Johnson, brother, Neil Olson, Sister-in-law, FayeDean Olson and niece, Sandy.

The family of Verla E Johnson created this Life Tributes page to make it easy to share your memories.

Send flowers to the Johnson family.