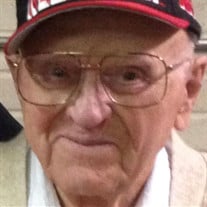 Theodore "Ted" A. Coufal died Wednesday, November 18, 2020 at Butler County Health Care Center in David City. IN LIEU OF FLOWERS, PLANTS AND STATUES: Memorials may be given in Care of the Family. Following the state COVID-19 guidelines and due to increasing COVID positive numbers, we will comply with social distancing seating and limited room capacity at the Rosary Service and Funeral Mass. When church reaches capacity seating, no entry will be allowed. Masks WILL BE required for entry into the church. The Funeral Mass & Rosary will be live-streamed beginning at 9:25am to our Facebook page: https://www.facebook.com/ChermokFuneralHome The family will not be hosting a funeral lunch following the burial. Theodore “Ted” Coufal, 96, of Brainard, Nebraska passed away peacefully on Wednesday, November 18, 2020 at the David City Hospital surrounded by loved ones. Ted was born January 17, 1924 on the farm near Brainard, Nebraska to Joseph and Lillian (Rejda) Coufal. He was the oldest of seven children. Ted graduated high school from Dwight Assumption Catholic school in Dwight, Nebraska. He met the love of his life, Evelyn (Rezac) at a wedding in which they were in the same bridal party and danced together. The two were united in marriage on January 24, 1945 at Saint Luke’s Catholic Church in Loma, Nebraska. Ted worked small, odd jobs to earn money and was determined to achieve his goal of establishing his own farm. He helped maintain the roads in Brainard and worked in Lincoln for Natkin and Company as a construction worker. In his early years, he participated on a bowling league and was the pitcher of his softball team. He enjoyed riding motorcycles and plowing through the snow on snowmobiles. His love for his toys and equipment never ceased throughout his lifetime. Ted later achieved his dream of creating a beautiful life on his family homestead in Brainard which served as his livelihood. He was incredibly blest with two daughters, Shirley and Noreen, and a devoted wife, Evelyn, of 70 years. In his leisure time, he relished fishing on his farm ponds that he developed, excavated, and stocked for family enjoyment. Ted was a hard-working man who built his life farming, raising cattle, growing crops, and living off his land. He always had four wheelers on the farm that were used for chores and only International tractors were allowed on his premises. He adored his family and would attend every event possible. He would always speak randomly in Czech to get a giggle out of whoever would listen, and never left an event without hugging and telling every person individually that he, “Loved you much.” Ted was often found reading the newspaper cover to cover and could update anyone on what was happening everywhere. He enjoyed daily visits with people over coffee at the local bar in Brainard. There was no stranger in Ted’s eyes, he knew everyone and would talk to anyone. He was a generous heart with a spitfire personality. Ted often offered his “candy” or chewing tobacco to everyone, he had the need for speed on his Polaris, and always wanted to learn something new. As the year’s past, he would take afternoon jaunts on his Polaris to check on his farms and drive to town. He enjoyed planting gardens on the farm or at the house in Brainard, watching them produce the fruits of his labor. He was generous to share his garden goodies and loved feasting on a prime rib dinner, tomato beer, and kolache. He had a love for polka music and a Sunday morning never passed by without it playing. A major highlight was when Ted had the opportunity to meet and attend the Mollie B Polka Party in Prague, Nebraska. He was a true Czech. Ted was a big fan of Nebraska football. Many times, he could be spotted sporting a Nebraska hat and he and Evelyn were season ticket holders for many years. He was a member of Holy Trinity Church in Brainard for over 45 years where he helped facilitate the annual church bazaar. Ted’s kind heart and generous spirit will be missed terribly. He was very fortunate to live independently and on his own terms for the past 96 years. Ted is survived by his daughters: Shirley (Rick) Culwell of Lincoln, and Noreen (Duane) Niemann of Lincoln; sisters: Florence (Gilbert) Kobza of Seward, and Sally Vandenberg of Brainard; sister-in-law, Marcy Coufal of Seward; five grandchildren: Kim (Rick) Stockman, Jason (Theresa) Codr, David (Roseann) Codr, Marisa and Cassie Niemann; seven great-grandchildren: Madison Stockman, Karly, Emma, and Carson Codr, Anisa (Markell) Richards, Rudy Paisley, and Imara Codr; one great-great-grandchild: Ellie Rose Richards; and many nieces and nephews. Ted is preceded in death by his wife, Evelyn Coufal; parents: Joseph and Lillian Coufal; brother: Richard Coufal; and sisters: Lillian Meduna, Geraldine, and Adeline Coufal (in infancy).

Theodore "Ted" A. Coufal died Wednesday, November 18, 2020 at Butler County Health Care Center in David City. IN LIEU OF FLOWERS, PLANTS AND STATUES: Memorials may be given in Care of the Family. Following the state COVID-19 guidelines... View Obituary & Service Information

The family of Theodore A Coufal created this Life Tributes page to make it easy to share your memories.

Send flowers to the Coufal family.