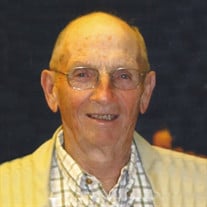 Terry Vavrina, 79, of Abie, passed away Tuesday, October 22 at the Butler County Health Care Center. Memorials can be directed towards Sts. Peter and Paul Catholic Church in Abie, the Abie Volunteer Fire Dept., or the Aquinas Endowment Fund. Terry Alan Vavrina was born in Abie, NE to Judith Kaspar Vavrina and Ernest Vavrina on November 12th, 1939. He was just a few weeks shy of turning 80 years old. Terry was an only child and attended Abie Grade School. He went to David City High School graduating in 1957 and after graduation, he attended the University of Nebraska-Lincoln for a short time later returning home to farm. He served in the Army National Guard from 1959-1965. On July 27th, 1963 he was united in marriage to Dorothy Ann Hunt at St. Mary’s Catholic Church in David City, NE. To this union, 5 children were born; Kimberly Ann Wells, Lynn Marie Hall, Richard Alan Vavrina, Randy Alan Vavrina, and Lee James Vavrina. He lived on the family farm his whole life and would not have wanted it any other way. He was a very active 56 year member of Sts. Peter and Paul Catholic Church in Abie serving on the parish council many times and was a member of the Abie/Bruno Knights of Columbus. He served as the Abie Public School Board president for 20 years, was a lifetime member of the Abie Volunteer Fire Department currently serving on the Rural Board, was a member of the Abie National Cemetery Board, and he served on the Aquinas High School Endowment Board. Terry farmed around Abie his whole life and sold Pioneer Seed Corn for over 50 years. He also raised cattle and hogs. The farm was his 6th child which he grew and nurtured into a successful business. Terry was a devoted family man. He never missed a ball game or event of his children and grandchildren. He traveled far and wide and there was never anything as important as these events. He was a man of few words but you always listened when he had something to say. He was easy to please, intelligent and witty and will be missed by all those who knew and loved him. Those left to cherish his memory are his wife of 56 years, Dorothy, daughters Kim Wells of Cairo, NE, Lynn (Joseph) Hall of David City, NE, sons Rick (Pam) of Abie, NE, Randy (Sandy) of Abie, NE, and Lee (Callie) of David City, NE; grandchildren Rachel (Gabe) , Emily (Connor), and Matthew Wells, Kendra (Nate) Tallman, Ryan (Katie) and Neely Vavrina, Jordan, Jessi (Chris), Tyler (Sierra) Vavrina, and Keegan, Taylor, Mia, Maverick, Mason, and Kaiser Vavrina. Terry is preceded in death by parents and his son-in-law, Dennis Wells.

The family of Terry A. Vavrina created this Life Tributes page to make it easy to share your memories.

Send flowers to the Vavrina family.