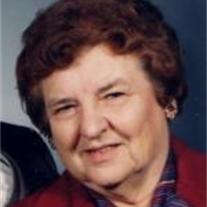 Sylvia A. Swoboda, 93, of David City, passed away Thursday, May 13, 2010 at the Butler County Health Care Center in David City. A Funeral Mass will be held at 10:00 am Monday, May 17, 2010 at St. Mary's Catholic Church in David City. Visitation will be from 6 - 7 pm Sunday follwed by a 7 pm Rosary, all at St. Mary's Church. Visitation will continue at 9:00 am Monday at St. Mary's Church until the Funeral Mass at 10:00 am. Burial will be at 2:00 pm Monday in St. Francis Cemetery in Wahoo. Sylvia was born on February 15, 1917 in Weston, Nebraska to Frank and Josephine (Bartek) Bouc. She graduated from Weston High School in 1934, attended Luther College in Wahoo, then taught in District 32 for three years. On January 3, 1939, Sylva was united in marriage to W.G. "Bill" Swoboda. They farmed in the Ceresco area until 1965 when they moved to the Bruno area. In 1991 they retired and moved to David City. Sylvia was a member of St. Mary's Catholic Church in David City, Parish Council of Catholic Women and the David City Senior Center. She enjoyed playing cards, baking and listening to accordian music. She was preceded in death by her husband, Bill, in 1998, son, Duane, in 1999, her parents, three brothers: Julius, Edward and Stanley Bouc and two sisters Ludmilla Chapek and Theresa Noha, and sister-in-law, Ann Bouc. Sylvia is survived by a son Ronald of Clarkson, daughter-in-law, Sharon Swoboda of LaVista, NE; 3 grandchildren: Daniel (Trish) Swoboda of Papillion, Jeff (Lucianna) of Costa Mesa, CA, and Katie Swoboda of Denver, CO; 2 great granddaughters: Ashton and Alexandra Swoboda of Papillion; sisters-in-law: Celestine and Georgianne Bouc and many nieces, nephews and cousins. Memorials may be made "In Care of the Family".

The family of Sylvia Swoboda created this Life Tributes page to make it easy to share your memories.

Send flowers to the Swoboda family.