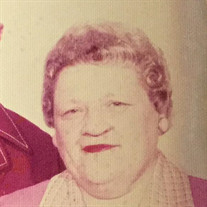 Rosie M. Osmera, 94, of David City, died Wednesday, September 19, 2018 at St. Joseph’s Villa in David City. Rosie was born May 2, 1924 to Edward and Mary(Zima) Janak near Surprise, Nebraska. She attended Surprise High School. Rosie was united in marriage to Edward Osmera. Together they farmed by Surprise until 1980, then moved to David City. They did custodial work for 1st National Bank for several years. Rosie was a great cook, and took pride in her crescents, and kolaches. She was also really great at being there for her family. She is survived by her sister: Mollie Jisa, of Lincoln; sister-in-law: Audrey Janak; nieces and nephews: LuJane(Ron) Skif, Randy(Barb) Janak, Raleen(Steve) Vrana, Dan Janak, Gale Gomez, Doug Janak, Colleen(Dave) Nielsen, Gene Jisa and Greg Jisa. Rosie is preceded in death by her parents; her husband: Edward; and brothers and sister: Alec, Bill, Adolph, George, Richard, Ernie, and Irene.

The family of Rosie M. Osmera created this Life Tributes page to make it easy to share your memories.

Send flowers to the Osmera family.