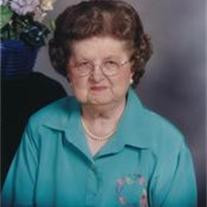 Rosalyn Catherine Hermsen, age 86 of David City, died Saturday March 17, 2012 at the Butler County Health Care Center in David City. Mass of Christian Burial will be at 10:00 AM Tuesday March 20, 2012 at St. Mary's Catholic Church in David City with Fr. Kenneth Wehrs as celebrant. Interment will follow at St. Mary's Cemetery. Visitation will be on Monday from 3 until 5 PM at Chermok Funeral Home and after 6 at the church with a 7 PM PCCW Rosary. Visitation will resume at 9 AM at the church on Tuesday. Memorials have been suggested to Masses or to the family in her name. Rosalyn was born November 28, 1925, to Mathias and Ludmila (Behne) Piitz on a farmstead near Brainard, Nebraska. She attended school at District 20 and David City, graduating from David City Public High School in 1942. She took normal training and attended the University of Nebraska. Rosalyn taught in various country schools in Butler and surrounding counties. She also did substitute teaching at Holy Trinity School in Brainard and St. Mary's School in David City. Rosalyn was active in a number of organizations in the church, school, and community. A long time member of St. Francis Catholic (Center) Church, she was an officer of the Altar Society, helped with putting together a parish cookbook, banners, and caring for the vigil lights. She helped as a volunteer at Aquinas High School. A 50 year member in the Catholic Daughters, she was an officer and helped with judging poster and poetry contests. Upon her husband's retirement from farming in 1980, she moved to David City and became a member of St. Mary's Catholic Church. Rosalyn was an officer of the Altar Guild, involved in the PCCW leading the rosary, prepared liturgy assignments, coordinated funeral dinners, and volunteered at St. Mary's School helping in classrooms and in the library. She volunteered at the Butler County Hospital and was a member of the Ladies VFW Auxilary. Her interests included collecting angels, crocheting, baking, canning, gardening, making crafts, playing bingo, collecting cookbooks, and spending time with her grandchildren and great-grandchildren. Rosalyn was united in marriage to Harold T. Hermsen on August 2, 1949 at Holy Trinity Catholic Church in Brainard. She is survived by 5 children, Joe (Karen) of Lincoln, Patricia Keller of Highlands Ranch, CO, Judy of Omaha, John of David City, and Cheryl of Omaha; 5 grandchildren, Bret (Jennifer) of Lincoln, Dan (Karlie) of Papillion, Kristin (Christopher) Strader of Lincoln, Greg and Spencer of Columbus; and 6 great-grandchildren, Neleigh, Paige, Olivia Catherine, Ryne, Calder, and Carson; sister Theresa Jaax of Shelby and brother Henry Piitz of Brainard, nieces, nephews, and cousins. She was preceded in death by her parents Mathias and Ludmila Piitz, husband Harold, brother Francis Piitz, and great-grandson Chase Strader.

The family of Rosalyn Hermsen created this Life Tributes page to make it easy to share your memories.

Send flowers to the Hermsen family.