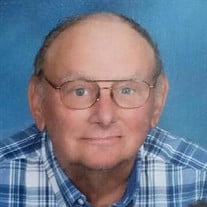 Roland J. Vrbka, 75, of Valparaiso, died Thursday, September 21, 2017 at St. Joseph's Villa in David City. MEMORIALS: Masses or Family Choice for later designation. Roland was born on October 8, 1941 at Surprise, Nebraska to Joseph and Rose (Polacek) Vrbka. He attended schools in the area, graduating from Ulysses High School in 1959. He entered the U S Army in 1964. He earned a Good Conduct and Expert Rifle Medal while serving and was honorably discharged in 1970. He was united in marriage to Carol Tesina on October 15, 1966 at Assumption Church in Dwight. Two daughters were born to this union. Roland worked various jobs until he was hired on at Goodyear. He retired after 35 years of service. In his retirement, he liked to tinker with woodworking and cars, he enjoyed going out to eat, especially the local church dinners. He enjoyed polka music, playing cards, taking car rides, and spending time with his granddaughter. Roland was a member of Sts. Mary and Joseph Church, Valparaiso Legion, and Msgr Raymond Wageman Knights of Columbus Council # 8625. Roland is survived by his wife of 50 years, Carol, Daughters: Anne and Mary Vrbka both of Valparaiso, granddaughter: Anastasia, brother: Ray (JoAnn) Vrbka of Firth, and sister: Judy (Pat) Osmera of Ulysses. He was preceded in death by his parents, and one sister, Therese Bouc

The family of Roland J Vrbka created this Life Tributes page to make it easy to share your memories.

Send flowers to the Vrbka family.