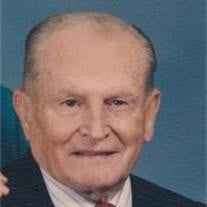 Robert P. Raric, 97, of David City, formerly of Bellwood, died Friday, May 3, 2013 at St. Joseph's Villa in David City. Funeral services will be Saturday, May 11, 2013, 1:30pm at the United Methodist Church, Bellwood, Nebraska with Rev. Mark Schutt officiating. Burial will be in the Bellwood Cemetery. Family will greet friends on Friday, from 5-7pm at Chermok Funeral Home, David City. Additional viewing will be Saturday one hour before services at the church. Memorials to the Bellwood United Methodist Church or the David Raric Scholarship. Robert P. Raric was born on March 19, 1916 at Bellwood, Nebraska to Gustave and Grace(Niesner)Raric, the youngest of five children. He attended Bellwood schools, graduating from Bellwood High School in 1934. During his senior year, he was on the state championship basketball team for Bellwood and was named All Tournament Athlete. He went on to radio school after high school and became the local "go to" man to fix radios, tv's, plumbing repair and any other fix-it needs. Bob married Lois Bouton on October 12, 1944 in Schuyler. Four children were born to this union. He then served as Bellwood's mayor for several years as well as serving on the Church, Town, and School boards. He was also on the cemetery board for many years. He was a member of the Odd fellows Lodge and the United Methodist Church. During his lifetime, Bob farmed, worked at Behlen Mfg, Columubs Hydrolics and for the Bellwood Public schools where he coached basketball and, until he retired, worked as a caretaker and bus driver. He had the proud distinction of being the oldest living citizen of Bellwood until he moved to David City and into St. Joseph's Villa. He was an avid gardener, raising roses, peonies, tiger lilies and his prized tomatoes. Bob is survived by his daughter, Pat Mick of Bellwood, Daughter-in-law: Susan Zlomke, 4 grandchildren and 9 great-grandchildren. He was preceded in death by his parents, his wife, Lois on Feb. 3, 2013, three sons: Richard, Robert, and David Raric, brother, son-in-law: Jerry Mick; sister-in-law: Jasper and Katherine Raric, three sisters and brothers-in-law: Viola(Quinn)Roten; Evelena(Joe)Swoboda; and Bess(Emerson)Kasparek.

The family of Robert Raric created this Life Tributes page to make it easy to share your memories.

Send flowers to the Raric family.