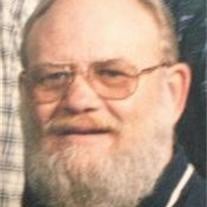 Robert "Bruce" Forney, 65, died Friday, November 1, 2013 surrounded by his loving family and friends at his residence. A memorial service will be Wednesday, November 6, 2013 at 1:00pm at Chermok Funeral Home with Pastor Jack McDonald officiating. Inurnment will follow in the David City Cemetery . Memorials in Care of the Family. Robert "Bruce" Forney was born July 17, 1948 and raised in David City, Nebraska with Robert and Dorothy (Griffiths) Forney as his parents. On December 21, 1966, Bruce and Gail (Cradick) were united in marriage. Three children were born to this union. Bruce was the owner of TYCO Classic Cars and Forney Trucking in Norfolk for most of his adult life. He enjoyed Harley motorcycles and made the trip to Sturgis 38 years in a row. Bruce would spend time deer and wild game hunting, fishing, restoring old things in the shop, and out at the lake with his family and friends. He is survived by his wife: Gail; children: Vern (Cassie) Forney, Tereasa Koenig (Brian Larson), and Jeffrey Forney all of Norfolk; brothers: Skip (Nancy) Forney of Tewksbury, MA, Lawrence Forney of Columbus, Tim (Kim) Forney of Columbus, and Bryon (Mary) Forney of David City; 7 grandchildren: Sarah Ann (Alex) Wurdinger, Chris Forney, Kaden Forney, Bailey Koenig, Emma Koenig, Hailey Forney, Braden Forney; 3 great-grandchildren: Destiny, Arase, and Alexander Wurdinger; and nieces and nephews. Bruce is preceded in death by his parents; and brothers: Jim and Roy Forney.

The family of Robert Forney created this Life Tributes page to make it easy to share your memories.

Send flowers to the Forney family.