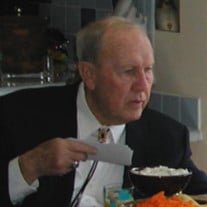 Robert F. Adamy, 94, of Bellwood, passed away August 7, 2016 at St. Joseph's Villa in David City. Little did Frank and Julia Adamy know that when their last child, Robert Francis Adamy, was born on January 18, 1922 in Bellwood, he would become their devoted son and caregiver. There were other aspects to Robert, of course, but the one that shines the best is the one that allowed him to give his life in service to his parents until the end of their lives in the 1960s. Frank developed polio as an adult, obviously a life-changing event. The house, the cars, everything had to be altered to accommodate his situation. Robert realized his parents needed help, so he stayed to help them. Robert had three brothers and a sister, all of whom preceded him in death - Francis, DeLores, and the twins, Leonard and Leo. To say they were a lively group would be an understatement. Their father had several siblings, but their mother, Julia, was an only child. Despite her more sheltered life, she provided them with a width and breadth of latitude and experiences while growing up that made all of them better and more interesting people. Listening to Robert and the others recount their childhood, it sounded a bit like controlled mayhem, a bit of a free for all that served them well. It sounded like fun. As the youngest, there was a hint or two that Robert might be the favorite. He's the only person any of us have ever known who never worked a 9-5 job. Although, it must be added that during World War II, when Leo and Leonard went off to war, Robert stayed home with a farm deferment, helping to manage both Leo and Leonard's farms until they returned. Robert tested for and obtained his real estate license and later his broker's license. He would tool around Butler and Platte counties in his shining and spotlessly clean car. His cars were always shining and spotlessly clean. Our grandfather Frank dressed with elan and style. So did Robert. Shyer as a child, probably because he had such noisy and older siblings, he grew into his own as an adult, developing a wide group of friends. When his sister DeLores Margrave and her family moved to Arizona in the 1960s, Robert hit paydirt. In 1963, he and his parents drove to Phoenix for the first time during the winter to stay with her. Back then, the air was good and fragrant with the blossoms of orange, grapefruit and lemon trees. The droves of people had not yet moved to the area. They only stayed two weeks (that dramatically changed through the years) but promised to return the next year. Grandpa died shortly after returning from Phoenix but the dye was cast. That next winter and every winter thereafter, Robert returned to Arizona. His visits got longer and longer, finally to the point he bought a car to drive while in Phoenix. Robert made many good, lifelong friends in Phoenix, who greatly mourn his death. Other Nebraskans wintered in the area, so he was busy almost every day going out and about to golf, attend baseball spring training games, have lunch or dinner or just go visit people. He had fun. The Adamys love to visit and we love to have fun. It's our national pastime. After his mother died in 1969, life shifted for Robert. For the first time, he was truly on his own. He, Leo, Leonard and Francis remained close. He would visit one or the other on their farms close to every day. After they saw one another, there would be the requisite phone call to end the day. While the brothers were very close, he was closest to his sister DeLores. They had an affinity for one another. When they hung out in Nebraska or in Arizona, their friendship and love for one another was present, Plus, DeLores had lots of patience, which one needed at times because Robert could be ornery as his nieces and nephews can attest. Nobody could give us the business better than Robert. Grandma used to let us run through their house like feral cats. We could tell it burned Robert up but when he tried to quell us, she'd always say "Robert, you leave those kids alone". Even though we could irritate him no end, he loved us and was loyal to us. He was proud of us and had our backs. That is a very empowering thing for people to know someone has their back. Robert had a great and abiding faith. He attended church every day and when he got older and developed serious health issues, he went as often as he could. He took comfort in the Mass and the rituals of the Catholic Church. He tried the best he could every day of his life. He was and is an example to all of us of his faith and his commitment and loyalty to family and friends.

Robert F. Adamy, 94, of Bellwood, passed away August 7, 2016 at St. Joseph's Villa in David City. Little did Frank and Julia Adamy know that when their last child, Robert Francis Adamy, was born on January 18, 1922 in Bellwood, he would become... View Obituary & Service Information

The family of Robert F. Adamy created this Life Tributes page to make it easy to share your memories.

Send flowers to the Adamy family.