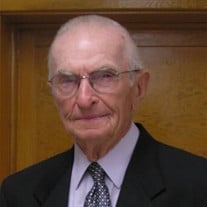 Richard Edwin Moravec, 92, of David City, died peacefully at St. Elizabeth's Hospital in Lincoln on April 10, 2018. Richard was born on July 7, 1925, at home near Ulysses, Nebraska to James and Carrie(Rerucha) Moravec. He married Maryann Svoboda on May 7, 1947, at Assumption Church in Appleton, NE. He spent his childhood trapping, hunting and fishing. Richard graduated salutatorian from Ulysses High School in 1942 and then attended the Lincoln School of Business. He was proud to have been a bus boy at the Cornhusker Hotel. He was part of the "Greatest Generation" who went to war to fight for the freedom of our country by serving in the United States Navy as a signalman. The ammunition ship he was aboard arrived at Iwo Jima two days before the American forces hoisted the American flag on top of the mountain. He was proud to receive a "Quilt of Valor" this past fall. Richard came home from the war, got married, raised a family and worked on the farm the rest of his life. He stayed faithful to his heritage, his Catholic faith and his family. Richard was a lifelong member of Immaculate Conception Catholic Church in Ulysses where he was member of the choir, an acolyte and reader. He was a member of the Knights of Columbus and the Dwight American Legion. In his early days, Richard was a member of the Butler County Fair Board, National Farmers Organization(NFO) and the Farmer's Coop Board. He loved a good auctioneer, a good tuba player and a good button accordion player. His other passions included Husker/Aquinas football and feeding cattle. Of these, his beef cattle always seemed to take priority. To his last days, he was always concerned if the cattle were fed! He was proud to top the market many times with his choice heifers. Checking the cattle and hauling the silage was his favorite daily activity. Richard was a proud man and it was an expectation that his children would do well. He always had words of encouragement and took great interest in their lives. Survivors include his children Allen (Diane) Moravec, David City; Julie (Keith) Wasem, Aurora; Luann (Dave) Zastrow, Lincoln; Russell (Diane) Moravec, David City; Mark (Judy) Moravec, Grand Island; Ann Marie (Brian) Bosshamer, Amherst; Grandchildren: Tony (Erica) Moravec, Michael (Lisa) Moravec, Marty (Erin) Moravec, Andy (Liz) Moravec, Chelsey (Tim) Girard, Jana (Warren) Gibson, Carter Wasem, Allison Zastrow, Adam Zastrow, Matt (Audra) Moravec, Trevor (Michaela) Moravec, Natalie (Mike) Stratman, Brent (Betsy) Moravec, Jillian (Jack) Burt, Samantha Moravec, Breanna Bosshamer and Brooke Bosshamer; 24 great-grandchildren; his sister, Arlene (Bernard) Kastl, sisters-in-law Henrietta (Fred) Benesch; Anita Svoboda, and Jill Woodward. He is preceded in death by his parents; wife: Maryann in 2014; brothers-in-law: Leander, Frank and Frederick Svoboda; sisters-in-law: Olga Janak and Christine Lacina; grandson: Jonathan Moravec; and great-grandson: Brody Moravec. In Lieu of Flowers: Memorials have been suggested to Aquinas Catholic Schools, Immaculate Conception Church, or Dwight American Legion.

The family of Richard E. Moravec created this Life Tributes page to make it easy to share your memories.