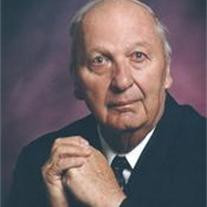 Raymond "Ray" Petrzilka, 78, of Brainard died Wednesday April 11, 2012 at Bryan LGH East Medical Center in Lincoln. Mass of Christian Burial will be 10:30 AM Saturday April 14, 2012 at Holy Trinity Catholic Church in Brainard with Fr. Matthew Eickhoff as celebrant. Interment will follow at Holy Trinity Cemetery. Visitation will be on Friday from 5:30 to 7:30 with a 7:30 PM parish rosary all at the church. Visitation will resume at 9:30 AM Saturday at the church. Memorials have been suggested to David City Aquinas Catholic School, Bishop Neumann Catholic High School in Wahoo or to Holy Trinity Catholic Church. Ray was born April 24, 1933 to Louis and Blanche (Pallas) Petrzilka at Loma. He attended District 90 school in Saunders County, completing the 8th grade. His young formative years were spent growing up on the family farm during the Great Depression; which became the rest of his formal education. At age 12, Ray was working in the fields with a four-some team of horses using horse drawn machinery, which was commonly used during this era of time. Ray spent many hours working the fields with his team of horses. Not surprisingly, later the well bred American quarter horses would become his true passion. Ray became a skilled horseman, pasturing the cow herd, wherever grass could be found in the drought depression years. Ray, along with his best friend George Niemann, spent countless hours enjoying horses. Ray married Joan Marie Codr on June 16, 1956 at Assumption Catholic Church in Dwight. Four children were raised in this family. Together with Joan, he purchased and operated the Loma Bar for 10 years. They brought with them their youth and a true work ethic which brought the town of Loma to life. Ray had an exceptional long term memory of people and events which he used in telling stories of the past; thus making him a very popular bar operator. His cousin, Joe organized softball teams from a wide area who took part in games on Sunday afternoons. The Loma Saddle Club, consisting of 40 members was organized by Ray. Families with their decked out horses participated in parades far and wide, including Omaha and Lincoln. Ray took delight in making sure his kids and all the kids in Loma had ponies to ride. Many happy hours were spent in the creeks and hills playing cowboys and bad guys. Ray was a lifetime member of the American Quarter Horse Association; a member of Holy Trinity Catholic Church as well as St. Luke's Czech Catholic Shrine of Loma. He was a registered quarter horse breeder, trainer and owner of many quarter horses that were sold and shipped throughout the nation and Canada. Ray was employed by Havlovic Heavy Equipment Soil Movers, and later was employed at Walker Manufacturing in Seward, he worked his way up to become foreman of fabrication. Ray is survived by his wife Joan of 55 years and 10 months of marriage; children Joni (Steve) Hansen of Ft. Calhoun, Kevin (Donna Nelson) Petrzilka of Brainard, Jan (Jay) Riemer of Joliet, IL and Joyce (Michael) Benes of Valparaiso; grandchildren Dane Hansen, Reid Hansen, Dillon Petrzilka, Mason Petrzilka, Joanna Riemer, Austin Benes and Ashley Benes. He was preceded in death by his parents.

The family of Raymond Petrzilka created this Life Tributes page to make it easy to share your memories.

Send flowers to the Petrzilka family.