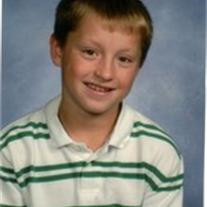 Drew Paul Allen Fiala, age 11, died Friday, March 12, 2010 at his residence. Funeral Mass will be Wednesday, 10:00am, March 17, 2010 at St. Mary's Church, David City with Fr. Bernard Kimminau officiating. Burial will be in St. Mary's Cemetery. Viewing will be Tuesday, from 3-7pm at St. Mary's Church followed by a 7pm parish rosary. Refreshments will be served at the KC Hall immediately following the rosary. Additional viewing will be on Wednesday, one hour before services at the church. Memorials may be given to the Aquinas Endowment Fund. Drew Paul Allen Fiala was born on March 17, 1998 at Columbus, Nebraska to Luke and Kandie(Gottschall)Fiala. He attended St. Mary's grade school and was currently a 6th grader at Aquinas Middle School. Drew enjoyed soccer and was looking forward to becoming a referee this year. He also enjoyed football, wrestling, golf, playing X-box and snowboarding. He played the trumpet in the middle school band and when time permitted, enjoyed fishing. He was a member of St. Mary's Church and the Knights of the Altar. He is survived by his parents, his sister Brooke of David City, grandparents: Betty and Keith Carter of St. Edward, Paul and Marlene Gottschall of Shelby, Peg and Harry Fiala of David City, Great-grandparents: Irene Gotschall of Columbus, Ernest and Lucille Fiala of David City and Gertrude Czapla of Spokane, WA; many aunts and uncles: Jill and Dan Prochaska, Scott and MaryJan Fiala, Jill and Scott were Drew's Godparents; Heath and Karen Fiala; Heath was to be Drew's confirmation sponsor, Dan and Sheri Fiala, Heather and Bud Engel, Patrick and Jamie Fiala, Johnathon Fiala, Brent Fiala, Rick Gottschall, Shane and Connie Gotschall, Kristen and Terry Topil, and Heather Anderson, many cousins and friends.

The family of Paul Fiala created this Life Tributes page to make it easy to share your memories.

Send flowers to the Fiala family.