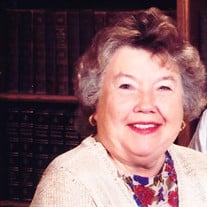 Patricia Lammers, 84, of David City, formerly of Lewellen and Kearney, died Wednesday, September 14, 2016 at her residence in David City, Nebraska. Memorials have been directed to: St. Jude's Research Hospital, Lewellen Library, or to Kearney Public Library. Private graveside services will be held for the family and close friends at a later date. Patricia was born on May 14, 1932 at Methodist Hospital in Omaha, NE to Margaret(Walford) and S. Pierce Allen of rural Ft. Calhoun, NE. A dependable, practical oldest sibling to 3 more out-going sisters, 'Patsy' was her mothers' tomboy and her father's helper on the farm. She attended Wranch rural District #7 School. Venturing from the 2 room to Blair High School and living with relatives in town was a shock to the shy 'bookworm'. She graduated as Salutatorian of Blair High School Class of 1949. She went on to earn her degree as a Registered Nurse from Methodist School of Nursing in 1953. The same school her mother, aunt, and roommate(soon-to-be-sister-in-law) had attended. It was in 1953 that the self proclaimed 'career girl' fell head over heels in love for the handsome airman Robert D. Lammers. They were married, October 25, 1953 at St. Mary's Episcopal Church in Blair, NE. Thus began, a romance that would burn brightly for the next 58 years. 'Pat' was a wonderful devoted mother, who was adored and respected by her husband and 5 children. While her children were young, Pat was a feature writer for the Callaway Courier under the pseudonym "Prairie Scooter Writes" and a published author in the Omaha World Herald. Always a proponent of education, after getting all 5 children in school, Pat went back to school, graduating from Kearney State College in 1977 with her oldest daughter, both receiving their Bachelor's degrees. Pat's in sociology, a feat not easily accomplished with 3 children and a husband in college at the same time and children in Jr. High and grade school. Pat was active in her church and community donating her time and talents to the Red Cross Blood Mobile and working 16 years as a nurse at the Buffalo County Detention Center. She had a passion for reading, a love of gardening, and a kind word for everyone. She will be greatly missed. Patricia is survived by her children: Bob(Marilyn) Lammers, of Kearney; Candace(Bryan) Niemann, of Rising City; Mike(Kerri) Lammers, of Chandler, AZ; Pat(Cindy) Lammers, of Shenandoah, IA; and Maggie Schnuelle, of Oceanside, CA; 9 grandchildren, and 12 great-grandchildren. She was preceded in death by her parents, her husband, Bob in 2011, and one sister.

The family of Patricia Lammers created this Life Tributes page to make it easy to share your memories.

Patricia Lammers, 84, of David City, formerly of Lewellen and...

Send flowers to the Lammers family.