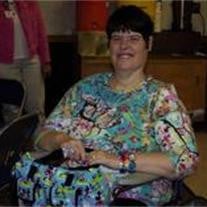 Trish Humphries Gassen, 44, of Columbus, died Saturday, May 14, 2011 at her residence after a courageous bout with cancer. Funeral Services will be Tuesday, May 17 at 10:30am in the First United Methodist Church, Columbus. Interment will be in Roselawn Cemetery, Columbus. Viewing will be Monday, from 5-7pm at Chermok Funeral Home, David City and Tuesday, from 9:30-10:30 at the church. Memorials to Region V Services. Trish Humphries was born on December 8, 1966 at Sioux Falls, South Dakota. Trish moved to David City in 1998 where she attended Region V Services and was active in numerous activities such as BINGO and KC Hall dances. She was employed by Columbus Manor in the dietary department. In 2001 Trish moved to Columbus where she continued her services with Region V. While in Columbus, Trish lead a very active and full life; she was employed by McDonalds and KFC, where her love for people allowed her to establish many friendships with her co-workers and customers. She enjoyed helping people, which was very apparent in her volunteer work at the Simon House and Mary’s Haven. Trish cherished her time with her friends, enjoying activities such as bowling, camps, YMCA, Special Olympics, ARC and People’s First. She also continued her education by taking classes at Central Community College in Columbus. When she wasn’t busy socializing with friends, she filled her time with her favorite hobby; shopping for purses, watches and jewelry. Trish loved to shop, especially purchasing her "bling" accessories. Her favorite color was pink. She liked to travel, visiting the surrounding states on several occasions. Trish is survived by her family; Kelly (Nancy) Gassen and family of Columbus; Shirley Petersen of Gordon; special friend Edward Kubicek of Columbus as well as all her friends at Region V, McDonalds, and KFC.

Trish Humphries Gassen, 44, of Columbus, died Saturday, May 14, 2011 at her residence after a courageous bout with cancer. Funeral Services will be Tuesday, May 17 at 10:30am in the First United Methodist Church, Columbus. Interment will... View Obituary & Service Information

The family of Patricia Humphries Gassen created this Life Tributes page to make it easy to share your memories.