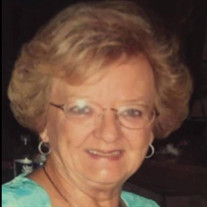 Patricia J. Comte, 76, widow of Bud, died Friday, September 25, 2020 at The Woodlands at Hillcrest in Lincoln, Nebraska Memorials: In Care of the Family Pat was born on March 22, 1944 at David City, Nebraska to James and Olga(Yindrick) Shorney.... View Obituary & Service Information

The family of Patricia J Comte created this Life Tributes page to make it easy to share your memories.

Send flowers to the Comte family.