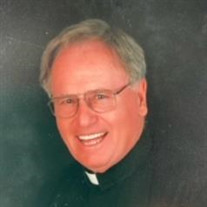 Rev. Msgr. Robert A. Roh, 82, of David City, formerly of Falls City, died Monday, March 14, 2022 at St. Joseph's Villa in David City. IN LIEU OF FLOWERS, PLANTS AND STATUES: The family has requested Memorials to: Falls City Sacred Heart School, St. Peter & Paul Catholic Church, Falls City, Aquinas Catholic Schools, David City or St. Peter and Paul Catholic Church, Abie. The Rosary in Falls City will be live streamed via this link https://www.facebook.com/dorrandclarkfuneralhome We will be recording the Funeral Mass in Abie and will post to the website within 48 hrs, barring any technical difficulties. Robert (Bob) Roh was born on September 16th, 1939, in Bruno Nebraska but spent most of his youth in the village of Abie, Nebraska on the family farm. Bob’s father, Leonard, first realized his eldest son was probably not cut out for farming the day he wrapped a 4-wire barb wire fence in the rotary hoe….. even before making it to the field! While farm work was not his forte, he excelled in academics. Bob graduated from St. Mary’s High School in 1957 and then attended Benedictine College in Atchison, Kansas. He then attended the Catholic University of America in Washington D.C., graduating with a BA and MA in Philosophy. He was then sent to Rome where attained a Licentiate Degree in Dogmatic Theology and was ordained a priest by Pope Paul VI on July 11, 1965. Later he completed graduate studies at Notre Dame University and then completed an additional MA degree in Educational Administration from Creighton University (1987). If you were to enter his office in Falls City, you wouldn’t find his accolades written down or see certificates hanging on his walls and you certainly wouldn’t hear him talk about them. However, if his students achieved a personal best, a state championship, or an academic achievement, prepare yourself to listen to a very loud and proud “father” brag about his kids! Catholic schools and Catholic education were his passion. He enjoyed all of it; banging of lockers closing, exhaust from the school bus, rainy day track meets, school lunches, bouncing basketballs, noisy halls before the bell, lecturing the seniors, clapping for the final volleyball point, award banquets, Kindergarten puppet shows, music concerts, trouble shooting computers, classroom presentations, the first and last day of school! His school philosophy was that every student deserves to have the bar set a bit higher than she/he can reach, no matter what her/his innate ability. “To whom much is given, much will be asked.” Luke 12:35-48 Monsignor had the pleasure of watching hundreds of high school seniors graduate, preparing couples for marriage, baptizing children (and then their children), bringing new members into the Church through RCIA classes, counseling parishioners, hearing confessions and celebrating Mass. It was not unusual for him to get home from a basketball game at 11:00 p.m. and receive a middle of the night call from the hospital to give last rites to a parishioner, then rise to celebrate a 6:15 a.m. Mass and be back in class by 9:00 a.m. He had the passion of a jack hammer when it came to taking on a task. His motto seemed to be If you’re going to do something do it with JOY & GUSTO! Whether it’s a $1.5 million parish expansion, cleaning fish or teaching religion (watch out for breaking chalk!). All of this “work” however wasn’t work to him, it was his parish, his family. His community involvement extended beyond church and school. Monsignor was a board member for Blue Valley, a board member for the Nebraska State High School Athletic Association (over 30 years), assisted North Central Accreditation teams, was a Chamber of Commerce member and participated in Ministerial Association work. In his free time he loved reading, writing, sports, cooking and FISHING! How many fishing stories are there about Monsignor?! While his peers and parishioners knew him this way, he was also a beloved member of the Roh clan. To his family he was Bob, a wonderful son, brother, brother-in-law and uncle who was never too tired to take his nephews fishing and hunting. Family gatherings involved lots of people, much laughter, great wine, Czech food (poppy seed kolaches, dumplings and kraut), reminiscing, hunting stories and lots of noise! The place he held in his family…….we really can’t explain, he was just dearly loved by us all. It would be impossible to attempt to share how, throughout his life, he has been a guiding light to family, students, colleagues, faculty and parishioners. How can a life be “summed up”….maybe this quote by Pope John Paul II comes close, “Each person, in some way, is called to work for the common good, constantly looking out for the good of others as if it were his own.” Monsignor Robert Roh Assignments – Diocese of Lincoln 1966-68 St. Joseph’s Parish and St. Joseph’s School, Beatrice, Ne. 1968-69 Chancery Office, Diocese of Lincoln 1969-71 St. Cecilia High School, Hastings, Ne. 1971-72 Graduate Studies University of Notre Dame, South Bend, In. 1972 Associate Pastor, Blessed Sacrament Church, Lincoln, Ne. 1972-88 Aquinas High School, David City, Ne. Religion and Coach 1975-88 Pastor, St. Peter’s Church Bellwood, Ne. 1988-2013 Pastor, Sts Peter & Paul Church Falls City, Ne. Superintendent Sacred Heart School He is preceded in death by his parents, Leonard and Leona Roh, his sister Mary (Katheryn) Lee and sister-in-law Lori Roh He is survived by his brothers, Jim Roh and Jerry (Tammy) Roh and sister Carolyn Simodynes, nephews Greg (Marissa) Roh, Mark (Erin) Roh, Kyle Roh, Joe (Keira) Simodynes and niece Dianne Simodynes.

The family of Rev. Msgr. Robert A Roh created this Life Tributes page to make it easy to share your memories.

Send flowers to the Roh family.