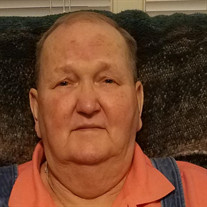 Milton G. Kobza, 82, of David City died Thursday, December 26, 2019 at CHI Health St. Elizabeth, Lincoln. IN LIEU OF FLOWERS, PLANTS AND STATUES: Memorials In Care of the Family. Milton "Milt" Kobza was born on March 24, 1937 on the farm near Brainard, Nebraska to Ivan and Marie (Bartak) Kobza. In 1955, he graduated from Maur Hill Academy of Atchison, KS. He entered the US Army National Guard in April of 1959, serving his country until his discharge in 1967. On August 7, 1965, he married Patsy Novak at St. Mary's Church, David City. Five children were born to this union. Milt was a farmer for many years. He loved the land and the outdoors. He and Pat moved to David City in 1980 from the Linwood area. He went to work as a custodian for St. Mary's School and later at the Sunshine Court, where he worked until retirement in 2007. He was a member of the Kregger American Legion Post of David City, St. Mary's Church, where he served as an acolyte, lector and commentator. He was a past member of the Linwood VFD and a COOP board member. Milt was honored in the early 1980's by the Zimmatic Irrigation Company for establishing a Sewer Irrigation System. He loved his family, especially his grandchildren and great-grandchildren, had a wonderful sense of humor and a deep love of God. He enjoyed traveling, reading and being out in nature. Milt is survived by his wife, Pat, Children: Vicki Kobza of Prague, Mark (Jill)Kobza of Bellwood, Nick (Michelle) Kobza of David City, Becky (Jeremy) Junck of Bellwood and Mitch (Sarah) Kobza of Wentzville, MO. one brother, Leroy Kobza of Duncan, 17 Grandchildren and 9 Great-grandchildren. He was preceded in death by his parents, a grandson, Adam Kobza, one brother, Dan Kobza, four sisters, Carm Malone, Marie Geiger, Ramona Abbot and Joan Bock.

Milton G. Kobza, 82, of David City died Thursday, December 26, 2019 at CHI Health St. Elizabeth, Lincoln. IN LIEU OF FLOWERS, PLANTS AND STATUES: Memorials In Care of the Family. Milton "Milt" Kobza was born on March 24, 1937 on the farm near... View Obituary & Service Information

The family of Milton G Kobza created this Life Tributes page to make it easy to share your memories.

Send flowers to the Kobza family.