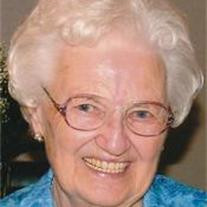 Mildred M. Berglund, 90, of David City passed away on November 12, 2012 at Butler county Health Care Center. Funeral Mass will be Saturday, November 17, 2012 at 9:30am in St. Mary's Church, David City with Fr. Bernard Kimminau as celebrant. Burial will be in the church cemetery. A Catholic Daughters Rosary will be held on Saturday, 9:00am at the church. Viewing will be Friday, 3-6pm at Chermok Funeral Home and Saturday, one hour before services at church. Memorials: In Care of the Family or St. Mary's Catholic Church. Mildred M. Berglund was born on August 15, 1922 at Abie, Nebraska to Edward L. and Jennie(Voboril)Zeleny. She attended Abie schools and graduated from Octavia High School in 1938. On March 26, 1940, she married Allen M. Berglund at Presentation Catholic Church. They farmed in Butler County until retiring and moved to David City in 1967. Mildred worked at the Butler County Hospital as a nurse's aide from 1963-1999. She was a member of St. Mary's Catholic Church, Catholic Daughters, Seminarian Club, PCCW and the Guild. Her Faith was very important to her. She attended mass and prayed her rosary daily. Mildred enjoyed gardening, having a special love for her roses, canning, baking, traveling to many states, reading, Czech, country and classical music, playing Bingo and volunteering. She was an avid sports fan, and especially loved Husker Football, Volleyball and professional golf. Mildred is survived by her sons: Burdette(Sandra) of Omaha; Roger of Washougal, WA; Daughters: Carol Berglund of Lincoln, Diane(Chris)Kosch of Manteca, CA; Cathy(Ed)Greguras of Seward, Barb(Tom)Tomek of St. Charles, IL; and Sheryl(Mike)Arneson of Cheyenne, WY; one brother: Edward Zeleny of Morse Bluff and one sister: Mary(Louis)Plasek of Quebec, Canada. 12 grandchildren, 15 great-grandchildren and one great-great granddaugter. Many nieces and nephews. She was preceded in death by her parents, her husband, Allen in 1998, one son Daniel in 1986, and one sister: Georgia Svatora.

The family of Mildred Berglund created this Life Tributes page to make it easy to share your memories.

Mildred M. Berglund, 90, of David City passed away on November...

Send flowers to the Berglund family.