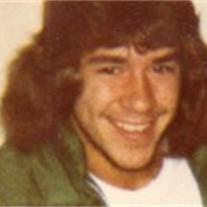 Michael D. Lieberman, 49 of David City, died Thursday, April 8, 2010 at David Place in David City. Funeral Services will be Monday, April 12, 2010 at 1:00pm in the Congregational Christian Church of David City with Pastor Jack McDonald officiating. Burial will be in the David City Cemetery. Viewing will be Sunday, 4-7pm at Chermok Funeral Home and on Monday from 12-1pm at the church. Memorials may be given In Care of the Family. Michael D. Lieberman was born on February 16, 1961 to Anton and Janis(Carlson)Lieberman at Omaha, Nebraska. He worked at the Schuyler Pack in production until his accident in January of 1981. He married Maxine Dush on Nov. 22, 1978 at Hot Springs, SD. Two sons were born to this union. Mike and Maxine later divorced. Mike enjoyed fishing, playing baseball and foosball and riding his motorcycle, being the great outdoorsman. He always had a smile for all those who would visit him and for the many friends he made at David Place over the years. Michael is survived by his mother: Janis Deavers of David City, two sons: Michael(Karla)Lieberman of Silver Creek, Matthew(Dana)Lieberman of Omaha; three brothers: Steve Lieberman of Arizona and Don Lieberman of Oklahoma; Jim Deavers of Grand Island; three sisters: Cheryl Lieberman of Columbus, Peggy(Bruce)Brahmsteadt of Dodge, and Janice(Clarence)Holland of Texas. Several nieces and nephews; Two granchildren: Easton and Matison Lieberman. He was preceded in death by his father, Anton, Step-father: Eugene Deavers, grandparents, brother, Ace, and nephew Dustin Mulenex.

The family of Michael Lieberman created this Life Tributes page to make it easy to share your memories.

Send flowers to the Lieberman family.