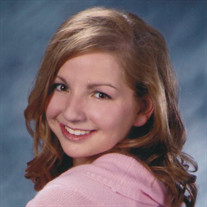 Melissa Dion, 26, of David City died Sunday, May 25, 2014 at Barnes-Jewish Hospital in St. Louis, Missouri. Melissa June Dion was born on March 9, 1988 at Columbus, Nebraska to Tom and Theresa(Klein)Dion. She attended David City schools, graduating from David City High School in 2006 where she was a National Honor Society member. Melissa was a valiant fighter of Cystic Fibrosis, known as the "Warrior Goddess" of CF. She worked at Didiers Grocery during her high school years, was a part-time student, and worked as a server in several food establishments. But whenever asked what she did, her first response was that she was a "Professional Cystic Fibrosis Ass-Kicker". She was known for her sense of humor, her quick sarcastic wit and for never giving up the good fight. Melissa enjoyed traveling, swimming, spending time with friends and watching movies. She was a movie trivia buff who loved life, family and animals, especially her cat Walter and dog, Gus. Melissa is survived by her parents, Tom and Theresa Dion, sisters, Amy and Maci Dion all of David City. Niece: Ellie Elgin of Stromsburg, grandmother: Marlene Dion of Columbus, special friend: Jason Frede of Rockport, and many aunts uncles and cousins She was preceded in death by her grandfather, Donald Dion and grandparents, Anton and Annie Klein.

The family of Melissa Dion created this Life Tributes page to make it easy to share your memories.

Send flowers to the Dion family.