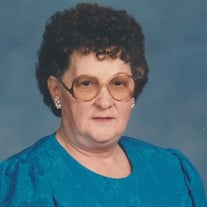 Maxine L. McDonald, 93, of Bellwood, died Saturday, May 30, 2015 at david place in David City. Memorials: Family Choice Maxine L. Crouse was born to Sidney and Vesta(Sodder) Crouse on April 9, 1922 at Fullerton, Nebraska. She attended school in Columbus and graduated from Kramer High School in 1941. As a young girl, she played softball on two different teams, the Dinettes and Irene Shop, winning pennants on both teams. Her second sport, which she continued to enjoy, until she could not physically participate, was fishing. Maxine fished the Platte and Loup Rivers with her parents and brought home many stringers of fish. On April 19, 1943, she married Jay C. McDonald Jr of Bellwood, while he was back from military service on furlough, and six children were born to this union. They made their residence in Bellwood after Jay returned home from the service. Maxine was an avid homemaker and loved children. She was baby-sitter, adopted mom and grandmother to many children other than her own. She also enjoyed a rousing game of cards with family and friends. She was a past member of the Bellwood United Methodist Church and a current member of the Congregational-Christian Church in David City. Her summers were spent doing a lot of canning, producing an abundance of canned goods for friends and family. She enjoyed many years of fun with the family at Brandenburgh Lakes, where she also filled many stringers of fish. Maxine is survived by her sons, Jack, Rick(Rene), and Rodney(Diana) all of Bellwood, and daughter, Judy(Greg)Svoboda of Bruno, daughter-in-law: Shirley McDonald of Bellwood, 14 grandchildren and 18 great-grandchildren. She was preceded in death by her parents, her husband Jay ,two sons, an infant Joseph and Gary McDonald, one brother, Elwin Crouse and one sister, Verla Jean Rodgers.

The family of Maxine L McDonald created this Life Tributes page to make it easy to share your memories.

Send flowers to the McDonald family.