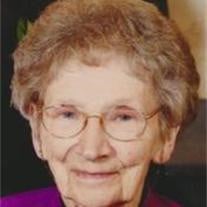 Mary J. Smith, 92, of David City, passed away on September 11, 2013 at St. Joseph's Villa. Funeral Mass will be Monday, September 16, 2013 at 10:00 am at St. Mary's Catholic Church in David City with Father Bernard Kimminau and Father Brian Connor as concelebrants. Burial will be in St. Mary's Catholic Cemetery. Visitation will be from 4-6 pm Sunday at St. Mary's with a 4 pm Catholic Daughters Rosary and a 6 pm Vigil Service with the Divine Mercy Chaplet. Viewing will resume one hour before mass on Monday. Memorials have been suggested to Aquinas/St. Mary's Catholic Schools Endowment Fund or St. Mary's Catholic Church Endowment Fund. Mary J. (Timms) Smith was born on October 19, 1920 to Worth W. and Caroline (Medinger) Timms in David City. She was the oldest of 3 children. She graduated from David City High School in 1938. She worked at the ASCS/FSA until retirement on May 1, 1988. Mary married Wilfred W. Smith on October 12, 1943. Three children were born to this union. They farmed near Bellwood and were members of Presentation Parish until 1969. In March of 1969; they moved to the family farm just west of David City. She was a current member of St. Mary's Parish in David City, Parish Council of Catholic Women, Catholic Daughters of the Americas, St. Joseph's Quilters, and the Daughters of the American Revolution. She initiated the praying of the Rosary prior to weekend Masses, and tended the flower garden at church. Mary loved gardening, sewing, quilting, going for rides in the country on a Sunday afternoon, taking bus tours with her sister and friends, and a cruise to Alaska with her sister. She made numerous quilts including a quilt for each of her children, and grandchildren. She enjoyed supporting and attending her grandchildren's activities. She is survived by her son: John (Marilyn) Smith; Daughters: Jean Hicks of David City, and Joan (Larry) Wolverton of Rio Rancho, New Mexico; Brother: Fred Timms of Carroll, Iowa; 4 grandchildren: Janelle (Brian) Muntz, Jodi (Michael) Dorcey, Jared Smith,and Megan Hicks; 3 great-grandchildren: Landon and Leighton Dorcey, and Callie Muntz; and several nieces and nephews. Mary was preceded in death by her parents; Husband: Wilfred; Sister: Margaret; Brother-in-law: Ernest Brockevelt; and sister-in-law: Grace Timms.

The family of Mary Smith created this Life Tributes page to make it easy to share your memories.

Send flowers to the Smith family.