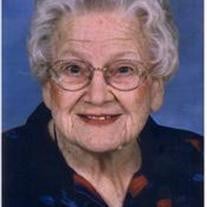 Mary J. Scholz, 95, of Bellwood, passed away Saturday, February 5, 2011 at David Place in David City. Funeral Mass will be Thursday, February 10, 2011 at 10:30am in St. Peter's Catholic Church, Bellwood with Fr. Jay Buhman officiating. Burial will be in Sts. Peter and Mary Cemetery, rural Bellwood. Viewing will be Wednesday from 2-4pm at Chermok Funeral Home, and after 6pm at the church followed by a 7pm Parish Rosary. Additional viewing will be Thursday, one hour before services at the church. Memorials may be given In Care of the Family. Mary J. Scholz was born on January 6, 1916 in Bellwood to Peter and Rose(Hilger)Hiller. She attended Marietta School. She married Marlin D. Scholz on May 3, 1938 at St. Peter's Catholic Church in Bellwood. Six children were born to this union. Mary lived in the Bellwood area most of her life until she moved to David Place in 2005. She was a member of St. Peter's Church, the PCCW, American Legion Auxiliary, Widow's club, and a member of the Red Hat Society. She enjoyed gardening, canning, cooking, baking, playing cards, and fishing, She was an avid Husker and Chicago Cubs fan. She also enjoyed watching her kids and grandkids at all their activities and spending time with family. Her favorite day was Sunday, on which she would attend Mass and then come home and listen to the Big Joe Polka Show. She was a generous, giving person who always thought of others before herself. Mary is survived by her children: Rita (Al)Hanus of Columbus, Fran (Jim)Mick of Bellwood, Joe(Shirley)Scholz of Bellwood, Pat Kochenderfer of Bellevue, Ken(Chris)Scholz and Greg Scholz both of Kansas City, MO. One sister: Roseann Moran of Alliance, NE; 16 Grandchildren; 40 Great-grandchildren and 2 great-great grandchildren. She was preceded in death by her parents, her husband Marlin in 1994, two grandsons; six brothers: Harry, Ed, Paul, Tony, Francis, and Chris Hiller and three sisters: Florence DeMuth, Eva Meysenburg, and Veronica Becker.

The family of Mary Scholz created this Life Tributes page to make it easy to share your memories.

Send flowers to the Scholz family.