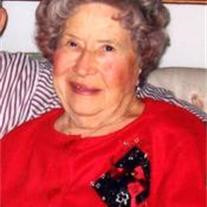 Mary Jane Oltmans, 97, of David City, died Tuesday, September 10, 2013 at David Place in David City. A Celebration of Life will be held at 1:00pm on Friday, September 13, 2013 at Chermok Funeral Home Chapel with Pastor Jack McDonald officiating. Inurnment will be at a later date. There will be no viewing or visitation, per Mary Jane's wishes, she was cremated. IN LIEU OF FLOWERS: Memorials In Care of the Family. Mary Jane (Harper)Oltmans was born on April 16, 1916 at David City to Nellie(Morgan)and Jonathon S. Harper. She was the youngest of six children. She attended David City Public Schools, graduating from David City High School in 1935. She then attended and graduated from beauty college in North Platte. Mary Jane worked at several area beauty shops until she opened Mary Jane's Beauty Shop, running that until her retirement in 1980. Mary Jane married Vern Oltmans on October 2, 1939 at Dundee Presbyterian Church in Omaha. Two children were born to this union. She was a baptized member of the Congregational Christian Church of David City. She enjoyed her flowers, Big Red Football, dancing, spending time with her family, grandchildren and great-grandchildren. Mary Jane is survived by her husband, Vernon, her daughter: Nancy(Gary)Riha of David City, daughter-in-law:Darlene Oltmans of Lincoln, sister-in-law: Muriel Harper of North Platte, 3 grandchildren, 6 great-grandchildren, several nieces and nephews. She was preceded in death by her parents, one son: Larry Oltmans, three brothers: Philip, Morgan and John Harper; two sisters: Henrietta Rabb and Lucile Heller.

The family of Mary Oltmans created this Life Tributes page to make it easy to share your memories.

Send flowers to the Oltmans family.