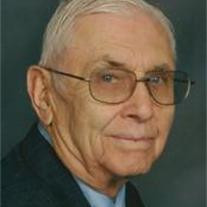 Martin Rathje age 82 of Shelby, died Sunday November 27, 2011 at Bryan LGH East Medical Center in Lincoln. Funeral Services will be Thursday December 1, 2011 at 10 AM at Faith Evangelical Lutheran Church in Rising City with Rev. David Schultz officiating. Interment will follow at Faith West Lutheran Cemetery. Visitation will be from 4 to 7 PM on Wednesday at Chermok Funeral Home in David City and will resume Thursday, one hour prior to the service at the church. Memorials In Care of the Family. Martin Ingward Rathje was born on August 9, 1929 to Ingward and Anna(Nuttleman)Rathje on the farm near Surprise, Nebraska. He attended the Cottonwood rural school near Surprise and graduated from Surprise High School in 1947. Martin farmed after high school until he entered the US Army and served during the Korean War from 1951 to 1953. On August 18, 1963 he married Zelma Todd at the Dover Federated Church in Dover, KS. Four children were born to this union. After Zelma's death in 1989, Martin married Avis Kuhnel on July 27, 1991 at Faith Ev. Lutheran Church in Rising City. Most of his life was spent farming, but he also worked at Henningson Foods and after retirement helped out at the Roberts Funeral Home in Osceola and David City and later at Dubas Funeral Home of Osceola and Chermok Funeral Home of David City. Martin was a member of St. John's/Faith Evangelical Lutheran Church of Rising City, serving as a council member and officer, Elder, Sunday School Teacher and choir member. He was also a member of the Shelby Legion Post 296, the Butler County REA Board, Butler County Fair Board, AAL/Thrivent local officer, The Blue River Squares Square Dance Club; Square Deal Card Club and a Shelby Senior Center volunteer. Martin enjoyed playing cards, shooting pool, traveling, fishing, deer hunting and visiting with friends, aquaintances and family. He is survived by his wife, Avis, son, Roger(Jolene)Rathje of Surprise; Daugthers: Virginia(Doug)Nelson of Spencer, Nancy Rathje of Denver, CO; Lena(Tom)Hockabout of Battle Creek; Step-sons: Wayland Kuhnel of Lincoln; Kirk(Deb)Kuhnel of Newburgh, IN; Shane Kuhnel of Peoria, AZ; Chuck Kuhnel of Lincoln; Step-daughters: Karla Kuhnel of Dadesville, AL; and Kayla(Pat)Paczosa of Genoa; one brother: Delmer Rathje of Shelby, 20 grandchildren. Martin was preceded in death by his parents, his first wife Zelma, and one brother, Ivan Rathje.

The family of Martin Rathje created this Life Tributes page to make it easy to share your memories.

Send flowers to the Rathje family.