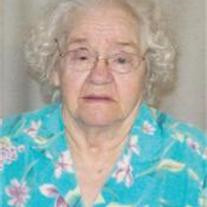 Martha L. Ebel, 101, of David City passed away on December 4, 2012 at St. Joseph's Villa in David City. Funeral Mass will be Monday, December 10, 2012 at 10:00am at St. Mary's Catholic Church in David City with Father Bernard Kimminau officiating. Burial will be in Sts. Peter & Mary Catholic Cemetery in Bellwood. Viewing will be Sunday from 2-5pm at St. Mary's Catholic Church. At 3pm there will be a rosary led by the Catholic Daughters. A Vigil Service and Rosary will be at 5pm at the church. Viewing will continue Mon. from 9-10am at the church. IN LIEU OF FLOWERS: Memorials have been suggested to St. Mary's Endowment Fund; Aquinas Endowment Fund or to Family Wishes. Martha (Gabriel)Ebel was born December 18, 1910 to John and Cecilia(Jaax) Gabriel on a farm near Osceola. She attended a country school near Osceola where she completed up to the 8th grade. On October 19, 1932 Martha was united in marriage to Henry Ebel at St. Andrews in rural Osceola. In the fall of 1967 they moved into David City. She was a busy farmer's wife, and also worked at Western Drive-In during the 70's. Martha enjoyed playing BINGO, cards with her family, and square dancing with her husband, Henry. She especially loved spending time with her grandchildren, great grandchildren, and great-great grandchildren. Martha was a member of St. Mary's PCCW, St. Mary's Guild, and was a member of Catholic Daughters for 50 years. She was very involved in church activities. Martha is survived by her son; Leon(Dorothy) Ebel of Columbus, Daughters: Sharon Reisdorff of David City, and Genevieve(Bill) Smejkal of Omaha, Sister: Dorothy Hiemer of Papillion, Sister-in-laws: Eileen Gabriel and Mary Schupach, 8 grandchildren: Kelly(Matt) Walker of Omaha, Lisa(Oscar) Mendez of Omaha, Dan(Leta) Reisdorff of David City, Deb(Gary) Dinkelman of David City, Tom(Kelly) Reisdorff of David City, Janet(Jeff) Buman of Harlan, Iowa, Jason(Leah) Smejkal of Omaha, and Robin(Marc) Chamberlain of Omaha, 23 great-grandchildren, 7 great-great-grandchildren, and several nieces and nephews. She is preceded in death by her parents, her husband Henry, 3 brothers: Albert, Ernie, and Art Gabriel, sister: Emma Ebel, son-in-law: Joe Reisdorff.

The family of Martha Ebel created this Life Tributes page to make it easy to share your memories.

Send flowers to the Ebel family.