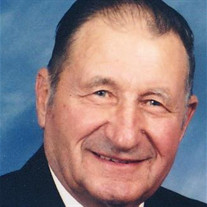 Mark B. Alt, 92, of Shelby died Saturday, June 11, 2016 at Norfolk Veterans Home in Norfolk. Memorials: Aquinas High School Endowment Fund Sacred Heart Catholic Church Mark B. Alt was born on November 2, 1923 to Emil and Mary(Bernt)Alt at Shelby, Nebraska. He attended Bluffton Country School and graduated from Shelby High School in 1941. Prior to entering the Air Force, he attended Frye Aircraft School in Omaha and worked at the Martin Bomber Plant. Mark entered the U.S. Army on February 2, 1943, serving two years in the South Pacific until his discharge on January 21, 1946. He was united in marriage to Edith Palik on January 27, 1948 at St. Mary's Catholic Church in David City. Mark farmed north of Shelby until his retirement in 1988, when he and Edith moved into Shelby. He worked at the Shelby Public Schools for six years. He was a lifetime member of Sacred Heart Catholic Church, the Knights of Columbus and Shelby Legion Post 296. Mark served the Shelby community by being a Weeblo Leader, and for many years, operated the Knights of Columbus roller skating rink and managed Little League baseball. Mark is survived by his wife, Edith, children: Cindy(Steve)McCawley of The Colony, Texas, Joan(Ron)Gerard of Omaha and Chris(Mary)Alt of Norfolk, Daughter-in-law, Judy(Bob)Sanders of Council Bluffs, Iowa. 10 Grandchildren and 14 Great-grandchildren, with number 15 due in October. He was preceded in death by his parents, his son, Gary Alt in 1998, brother, Maurice Alt and sister, Loyola Hiemer. A funeral lunch will be served at the Shelby Legion Club immediately following the graveside service.

The family of Mark B Alt created this Life Tributes page to make it easy to share your memories.