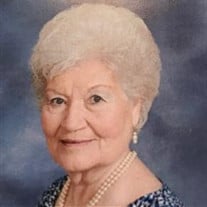 Marie Witzel, 84, of Brainard died Monday, April 23, 2018 at Greene Place in Seward. MEMORIALS: Family Wishes: Cards/Memorials may be sent to: Marie Witzel Memorial c/o Bill Witzel 168 N. 1st Street Dwight, Nebraska 68635 Marie was born on December 30, 1933 at Brainard, Nebraska to Louis and Josephine (Kantor) Mergl. After graduating from high school, she attended Wayne State College to earn her teaching certificate. On June 3, 1952, she married William J. Witzel at Holy Trinity Church in Brainard. Two children were born to this union. Marie was a faithful member of Holy Trinity Parish. She served on the church board, rosary leader and as an Extraordinary Eucharistic Minister. Marie was a member of the PCCW and the Community and Prayer Support Group (CAPS). She sang in choir for 55+ years and was also a member of the Cornerstone Group. After her family had grown, she went back to school and earned her nursing degree, and went to work at the David City Hospital as an LPN for nearly 20 years until retirement. Marie was an avid reader and had a great love for her pets on the farm. She enjoyed being out in her flower garden, dancing, playing cards and the special relationships she forged with her grandchildren. She was very traditional when it came to the holidays and was responsible for observing the Witzel Christmas date every year. She would play the piano on Christmas Eve, ending the night with "Silent Night" which would be followed by a visit from Santa. Marie was close to her nieces and nephews as well as her family. She was greatly interested in their activities and what was going on in their lives. Marie is survived by her daughter: Carla Weston of Eastsound, WA, her son: Bill (Valerie) Witzel of Dwight. Sister: Margie Krenk of Visalia, CA, 7 grandchildren: Jerrod (Heather) Witzel, Jill (Mike) Hewett, Nathan (Fran) Novak, Traci Novak, Kristy (Rick ) Matson, Traci (James) Ford, Billie (Jordan) Stabenow, 12 Great-grandchildren with one more on the way. She was preceded in death by her parents, her husband, Bill in 2000, granddaughter: Cayce Witzel, one infant sibling, one young sister, three brothers and two other sisters.

The family of Marie Witzel created this Life Tributes page to make it easy to share your memories.

Send flowers to the Witzel family.