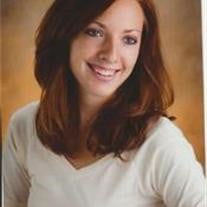 Mari Frances Pesek, 25, the youngest daughter of Tom and Gretchen (Linder) Pesek, was born December 17, 1987, in David City, and passed away in a car accident in Oregon on September 11, 2013. A memorial funeral mass will be Tuesday, September 17, 2013 at 10 am at Holy Trinity Catholic Church in Brainard with Father Matthew Eickhoff officiating. Family will be greeting friends Monday from 5-7 pm at the church followed by a 7 pm Wake Service and Rosary. Burial will be at a later date. As per the request of the family, Mari was cremated. Memorials have been suggested to Masses or to Family Wishes. She grew up in Brainard and graduated from East Butler High School in 2006. She was the class salutatorian and a member of the 2004 and 2005 Class D State Champion cross country teams. She attended the University of Nebraska-Lincoln, graduating with highest distinction in 2010 with a degree in environmental studies. She completed her master's degree in prairie ecology at the University of Kansas in Lawrence in August. She was the Butler County Czech Queen in 2008. Mari and her brother Alex were in the midst of a month-long camping and hiking trip. They had just completed hiking the John Muir Trail in California and had climbed to the summit of Mount Whitney. Mari was always adventurous, as well as creative and artistic -- her family and friends particularly looked forward to receiving handmade gifts and birthday cards. She excelled at all things craft-related, but was an especially good knitter. She had a gift for finding beauty in the unexpected, including spiders, which she studied in both her undergraduate and graduate careers. She was humble, thoughtful and extremely funny. She loved animals, especially her cats. Most of all, she a warm and generous friend, sister, daughter and girlfriend, as well as a good listener (when she wanted to be), and a good soul. She is survived by her mother and father, as well as by sisters, Cara Pesek of Lincoln and Anne (Zach) Pesek Taylor of Salt Lake City, Utah; her brother, Alex, of Lincoln; and her boyfriend, Joe Link, of Lawrence, Kan., as well as by aunts, uncles, cousins and many, many friends. She was preceded in death by her grandparents, Charles and Frances (Vogeltanz) Pesek of Brainard, and Norman and Margaret (Terwilliger) Linder of Dunning.

Mari Frances Pesek, 25, the youngest daughter of Tom and Gretchen (Linder) Pesek, was born December 17, 1987, in David City, and passed away in a car accident in Oregon on September 11, 2013. A memorial funeral mass will be Tuesday, September... View Obituary & Service Information

The family of Mari Pesek created this Life Tributes page to make it easy to share your memories.

Mari Frances Pesek, 25, the youngest daughter of Tom and Gretchen...

Send flowers to the Pesek family.