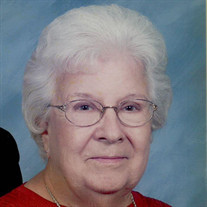 Margaret A. McCracken, age 96, of Rising City, entered heaven into the loving arms of Jesus, on November 20, 2021, at Seward Memorial Hospital. IN LIEU OF FLOWERS, PLANTS & STATUES: Memorials to Family wishes for designation at a later time. Margaret was born on May 4, 1925 on a farm southeast of Beaver Crossing, NE, the second of four children born to Walter and Phoebe (Scott) Ebers. She was baptized at the home of her grandparents, on March 28, 1926, by Rev. A.J. Wurst. She attended Beaver Crossing High School, and graduated in May 1943. Margaret taught in the rural schools of Seward County for several years. She was united in marriage to George McCracken on May 5, 1945, at the United Methodist Church in Beaver Crossing. They had one son, Thomas Dean. They farmed the McCracken homestead in Seward County for a few years and then moved to a farm in Butler County, where they farmed until retiring to their home in Rising City in 1988. Margaret and George enjoyed collecting Aladdin lamps and researching the genealogy of their families. Margaret was a member of the United Methodist Church for over 74 years, the United Methodist Women, the Order of Eastern Star, and was appointed a Grand Representative to Georgia from 1962-1965. Quite frequently, she was a volunteer, collecting for the Heart or Cancer Drives in Rising City. In 2015, George and Margaret celebrated 70 happy and loving years together. Margaret liked her flowers and especially enjoyed feeding and watching our feathered friends year-round. She loved her children, grandchildren, and great- grandchildren who brought great joy to her life. Survivors cherishing her memory include her son and daughter-in-law, Tom and Viki, Rising City; two grandchildren, April (Cody) Keezer, Columbus, Cory (fiancé Brittany Newill) McCracken, Rising City; seven great-grandchildren, Haley (Nathaniel), Braedyn, Camdyn, and Kasha; Aaron, Kaylin, and Michael; brother, Robert (Janice) Ebers of Mansfield, TX , and sister-in-law, Doris McCracken of Seward, many nieces, nephews, and friends. Margaret was preceded in death by her husband, George (2015); her parents; step-father, Roy Huffman; sister, Maxine (Bill) Scully; brother, Dr. Dale (Gloria) Ebers.

Margaret A. McCracken, age 96, of Rising City, entered heaven into the loving arms of Jesus, on November 20, 2021, at Seward Memorial Hospital. IN LIEU OF FLOWERS, PLANTS & STATUES: Memorials to Family wishes for designation at a later time.... View Obituary & Service Information

The family of Margaret McCracken created this Life Tributes page to make it easy to share your memories.

Send flowers to the McCracken family.