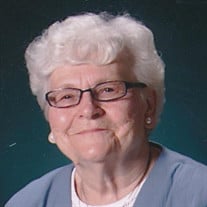 Margaret Ann Hotovy, 90, widow of Ernest, of David City died June 26, 2015 at the Butler County Health Care Center in David City. Memorials: In Care of the Family Margaret Ann Hotovy was born on March 5, 1925 to Charles and Anna(Matousek)Rech at Osceola, Nebraska. She graduated from Osceola High School in 1942 and went on to receive her teaching certificate. She taught at a country school in the Osceola area. She later contributed to the war effort by traveling to Colorado to work in a bomb factory. Margaret Ann returned to Nebraska and worked as a telephone operator until her marriage to Ernest J. Hotovy on June 22, 1948 at St. Mary's Church, David City. Four children were born to this union. Margaret Ann was a dedicated homemaker and mother, raising her four daughters and helping her husband in the furniture store. In the 1970's, she returned to retail work at Schweser's in Columbus. Margaret Ann was involved in many community and school related functions. She volunteered at Aquinas High School, and she was a member of the Red Hat Ladies Club, Northside Extension Club, St. Mary's PCCW, Catholic Daughters of America, and St. Mary's Church. She helped out at Region V Services acting as chaperone on field trips and planning birthday parties. She was a caregiver for several family members throughout her lifetime and a cancer survivor who annually participated in the Butler County Relay for Life. She enjoyed cooking, gardening, entertaining, traveling, going to weekly dances with Ernie, listening to music and attending local fine arts programs. Her leisure time was spent at their cabin on Wagner's Lake near Columbus which they owned for over 40 years. She often played cards, founding and belonging to their pitch club for 30+ years. Margaret Ann is survived by her daughters: Merry Kaye(Michael)Sullivan of Milwaukee, Wi, Michele(Thom)Hogan of Chicago, Il, and Marcia Hotovy of St. Paul, MN, and two grandchildren: Jessica Hogan and Kevin Sullivan. She was preceded in death by her parents, her husband: Ernest in 1994, daughter: Melissa in 2012, one brother: Raymond Rech and three sisters: Laura Bose, Alice Weinberg and Mildred Rech.

The family of Margaret Ann Hotovy created this Life Tributes page to make it easy to share your memories.

Send flowers to the Hotovy family.