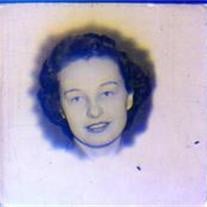 Margaret Ann Fricke, 88, of Ulysses, died Monday, December 9, 2013 at St. Joseph's Villa in David City. Funeral Services will be 11:00am, Friday, December 13 at Immanuel Lutheran Church, rural Rising City with Rev. David Palomaki officiating. Burial will be in the church cemetery. Viewing will be Thursday, from 12 until 6pm with family greeting friends from 4-6pm all at Chermok Funeral Home. Additional viewing will be Friday, from 10-11am at the church. Memorials: Immanuel Lutheran Church, Red Cross or Alzheimers Association Margaret was born on June 12, 1925, on the farm near Rising City, to Carl and Cente(Schroeder)Glock.  She graduated from Ulysses High School in 1942 and went on to business college, where she graduated and went to work as a bookkeeper in Grand Island.  She  married Eilert Fricke on Sept. 8, 1946 at Immanuel Lutheran Church, rural Rising City.  Four children were born to this union. Margaret was involved with many activities during her lifetime.  She was a member of the Ulysses Extension Club, LWML, Immanuel Lutheran Ladies Aid, a Red Cross Volunteer where she worked many blood drives, a 4H Club Leader, taught piano lessons and was the church organist until her retirement in 2000.  She also belonged to the Pork Producers Assoc and the Gray Ladies.  She was a world wide traveler, loved to garden, sew, bake, play piano and organ, belonged to card club, and helped out on the farm.   She especially enjoyed the Christmas season.  Her most cherished time was the times she could spend with her grandchildren.     Margaret is survived by her husband, Eilert, children: Patricia Wilcox of Springfield, NE; Jan(Lori)Fricke of Ulysses, and Marla Fricke of Kansas City, KS, one sister: Joseline Buck of Lincoln, 7 grandchildren, 9 great-grandchildren, son-in-law: Keith Rohwer of Fremont, NE. She was preceded in death by her parents, one daughter: Barbara Rohwer, grandson: Aaron Wilcox and three infant grandchildren: Joshua, Mattie and Carley Fricke.

The family of Margaret Fricke created this Life Tributes page to make it easy to share your memories.

Send flowers to the Fricke family.