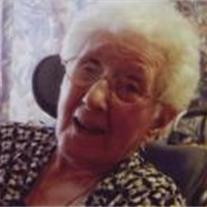 Margaret Ann "Peggy" Mitchell, 87, of David City, died Sunday, January 9, 2011 at St. Joseph's Villa in David City. Funeral Mass will be held at 10:00 am Thursday, January 13 at St. Mary's Catholic Church in David City. Visitation will be Wednesday, January 12 from 3 - 6:30 pm at Chermok Funeral Home followed by a PCCW Rosary at 6:30 pm.at the funeral home. Visitation will continue Thursday one hour before services at St. Mary's Church. Burial will be in St. Francis Cemetery (Center) rural David City. Peggy was born in David City on June 21, 1923 to Dr. William F. and Teckla Carolyn (Kaminske) Gilmore. She graduated from David City High School in 1940 and later from the National Business Institute in Lincoln, Nebraska. She married John Roy Mitchell at St. Matthews Cathedral in Washington, D.C. on July 21, 1943. After graduating from Business School, she was recruited by the then "War Department" which is now the Department of Defense and moved to Washington, D.C. to start a career that lasted for 35 years. In the 1950's she worked for the Department of the Army, Judge Advocate General's Office (J.A.G.O.). There she worked on the revisions of the current Court Martial Manual. She also participated in occasional "war games" with members of President Eishenower's staff. They would "weekend" in areas oustide the Washington D.C. area in preparation of "nuclear destruction". In 1958 she transferred to the Joint Chiefs of Staff, working in the Joint Intelligence Objectives Agency (J.I.O.A.). They were instrumental in recruiting and procuring outstanding European Scientists to work at the Red Stone Arsenal. In the 1960's while still working for the Joint Chiefs of Staff, she joined the Joint Command and Control Requirements Group and helped establish the World Wide Command and Control System, designing the C5A and C5P and Air Force One. In the 1970's she worked in the Office of the Secretary of the Defense, Legislative Liaison under Secretary of Defense, Dr.Arthur Schlesinger and Elliott Richardson, working closely with the Senate and House Armed Services Committee to assure proper Legislation. As a 10 year member on the Board of Directors of the Office of Civil Defense, she was responsible for the Annual Secretaries Reception and Dinner Dance. In 1970, on the 25th Anniversary of the establishment of the Department of Defense, she chaired the Anniversary Ball celebrating the occasion attended by Secretary of Defense, Melvin Laird and members of his cabinet. She retired in 1977 to the shores of the Atlantic Ocean in Rehoboth Beach, Delaware. After her home was destroyed by fire in September 2003, she moved back to David City. During her active years, she enjoyed bowling, having many 300 games, playing bridge, gardening, knitting and spending time with her family, friends, grandchildren and great-grandchildren. Peggy is survived by her daughter Carolyn (Frank) Brabec of David City; grandchildren: Daniel Brabec of Ames, IA and Pamela (Nathan) Scott of David City; great grandchildren: Noah Frank Scott and Maxwell Douglass Scott, of David City; brothers: William Joseph (Theola) Gilmore of Florence, Oregon, and John James Gilmore of Corona, CA; sister: Kathleen Ann Powers of Lynnfield, MA; sister-in-law: Lucinda Morton (Mitchell) Griffin of Culpeper, VA. Peggy was preceded in death by her parents, husband, John in 2009, and daughter Barbara Jane Mitchell. Memorials are suggested to Family's Choice.

The family of Margaret A Mitchell created this Life Tributes page to make it easy to share your memories.

Send flowers to the A Mitchell family.