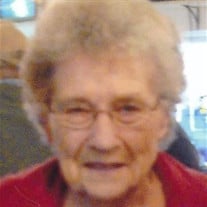 Marcella (Sabata) Kozisek, 88, of David City, passed away October 2, 2016 at Good Samaritan Society, in Osceola. Marcella was born on March 5, 1928 to John and Ella(Kudlacek) Sabata in rural Butler County. She attended country school until 8th grade, until her mother fell ill. On September 2, 1947, Marcella was united in marriage to Richard Kozisek. They farmed near David City, then moved to Columbus, Bellevue, and Richland. While they lived in Richland, she worked at Dale Electronics, as a coil winder. Then they moved to Rising City, were she worked at Bector Dickenson, until retirement after almost 25 years. Marcella enjoyed playing cards, gambling, gardening, embroidery, crocheting, and Polka music. She also like going on bus tours with Mark Vyhlidal. Marcella is survived by daughters: Carol(Marvin) Miller, of Columbus, and Linda(Russell) Tichota, of Rising City; son: Duane(Ramona) Kozisek, of Gresham; brother: Johnny Sabata; 6 grandchildren: 6 great-grandchildren; and several nieces and nephews. She is preceded in death by her parents; husband: Richard in 1984; half-brother: Henry Sabata; and 1 great-granddaughter.

The family of Marcella Kozisek created this Life Tributes page to make it easy to share your memories.

Send flowers to the Kozisek family.