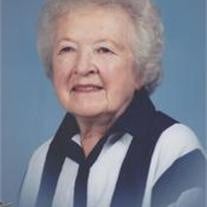 Marcella Bruner, 91, of Omaha, formerly of Brainard, died Wednesday, October 30, 2013 in Omaha. Funeral Mass will be Saturday, 10:30am at Holy Trinity Church, Brainard, with Fr. Matthew Eickhoff officiating. Burial in Holy Trinity Cemetery. No public viewing. Rosary will be Saturday, 10:00am at the church. Memorials: American Legion Ladies Auxillary of Brainard. Marcella J. Bruner was born on November 30, 1921 on the farm near Bruno, Nebraska to Frank and Anna(Kantor)Chmelka.  She graduated from Brainard High School and married John E. Bruner on June 11, 1941 at St. Anthony de Padua Church, Bruno.  Two daughters were born to this union. After their marriage, they lived in California, Georgia and Ohio until settling down in Brainard, Nebraska where they farmed for many years together.  Marcella loved to sew, bake, play cards, crochet, raise a large flower and vegetable garden.  She especially loved having her grandkids spend time with her on the farm.  She was a member of Holy Trinity Church for over 50 years, a member of the Brainard Legion Auxilary since 1963 and secretary of the FCSLA(Catholic Workmen) until this past year.   In her later years, she moved to Omaha to be closer to family where she was a member of St. Vincent de Paul Church.  She passed away at Hospice House/Josie Harper Residence on October 30, 2013. She is survived by her daughters, Dianne(Phil)Kimnach of Omaha and Janelle(Roger)Hotovy of Lincoln, 6 grandchidlren and 9 great-grandchildren.  She is preceded in death by her parents, her husband John in 1992, two brothers: Gilbert and Ermin Chmelka and three sisters: Irene Chmelka, Mildred Soukup and Adeline Zelda.

The family of Marcella Bruner created this Life Tributes page to make it easy to share your memories.