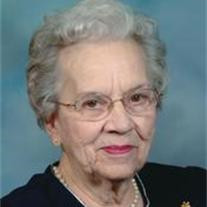 Lula V. Pleskac, 93, of David City, died Thursday May 24, 2012 at Crete Area Medical Center. Funeral Services will be Tuesday, May 29, 2012, 10:30am at Redeemer Lutheran Church, David City with Rev. David Palomaki officiating. Burial will be in the David City Cemetery. Viewing will be Monday, 4-7pm at Chermok Funeral Home and Tuesday, one hour before services at the church. Memorials In Care of the Family. Lula Veva Barlean Hoeft Pleskac was born on July 24, 1918 to James A. and Myrtie Mae(From)Barlean and passed away on May 24, 2012 at the age of 93 years and 10 months. She was baptized on April 10, 1938 at the Methodist Episcopal Church in Rising City, Nebraska. She was confirmed at Immanuel Lutheran Church near Rising City on September 28, 1941. She was an active member of Immanuel Lutheran Church and later Redeemer Lutheran Church in David City. Lula graduated from David City High School in 1935. She was a loving mother, grandmother, and great-grandmother. In addition to enjoying baking and cooking for large family gatherings, Lula was very active in the community as a member and volunteer of several organizations. The last four years, she loved playing cards, bingo and many of the activities at Tabitha Care Center in Crete. She married Otto Hoeft on December 6, 1939. They lived on the farm for many years and were blessed with three children. After his death in 1986, she married Rudy Pleskac on January 30, 1988 and they enjoyed 17 years together. She is survived by her three children: Marilyn(Dennis)McElravy of Crete, Doris(Michael)O'Brien of Omaha and Dr. Robert(Nancy)Hoeft of Mahomet, IL. 7 grandchildren and spouses: Daniel(Debora)McElravy, Don McElravy both of Crete, NE; Kathryn(Thomas)Langlois of Montgomery, TX, Jeffrey(Sue)Hoeft of Laguna Hills, CA, Angie Deaville of Champaign, IL,Melissa (Brian) Wade of Loveland, OH; Jennifer (Darren) Tee of Mohomet, IL; Gina(Chris)Limmer and Patrick(Amy)O'Brien of Ralston, 27 great-grandchildren. Step-children: Jeannie(Walt)Svoboda of Cedar Falls, Ia, Jim(Marian)Pleskac of Lincoln, Joe(Sue)Pleskac of Centura, WI, and Gary(Silvia)Pleskac of Richmond, VA, many step-grandchildren and step-great grandchildren. She was preceded in death by her parents, husbands, Otto Hoeft and Rudy Pleskac, son-in-law: Michael O'Brien and step son-in-law: Walt Svoboda.

The family of Lula Pleskac created this Life Tributes page to make it easy to share your memories.

Send flowers to the Pleskac family.