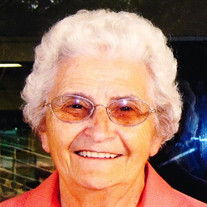 Ludmilla "Ludy" Birkel, 90, of David City, passed away on October 25, 2015 at St. Joseph's Court in David City. Ludy was born March 27, 1925 to Leo and Mary (Mach) Hanus, on a farm near Brainard. At a young age, the family moved to a farm near Bellwood where she attended St. Mary's grade school at Presentation Parish then graduated from Marietta High School in 1942. After high school, she took a job at First National Bank, in David City, to help pay for her younger sister's Catholic tuition. On January 6, 1947, Ludy was united in marriage to Clarence "Farmer" Birkel and from this union, 8 children were born. She devoted her life to raising her family, in large part by gardening, canning, cooking, baking, sewing, and later took up crocheting. Her commitment to her Catholic faith was demonstrated in her involvement in the Parish Council of Catholic Women (PCCW), Catholic Daughters, St. Mary's Guild, the Seminarians Club and the Altar Society at both Presentation Parish and St. Mary's Parish. She served as an officer in each of these organizations. Ludy is survived by her children: Jane(Bob) Gibson, of Lincoln, Nick(Cherie) Birkel, of Lincoln, Mary Schoenbein, of Littleton, CO, Teresa(John) Wayne, of Grand Island, Rita(John) Sabata, of David City, Joe(Jeanette) Birkel, of David City, Diane(Jim) Bruno, of Oklahoma City, OK, and Paul(Michelle) Birkel, of Lincoln; sister: Sr. Marietta Hanus OSF, of Milwaukee; 29 grandchildren; and 26 great-grandchildren. She is preceded in death by her parents; her husband: Clarence, in April of 1991; 4 brothers: Leo, John, Joe, and Charles Hanus; 3 sisters: Mary Steager, Anne Morbach, and Emily Hilger; and an infant great-granddaughter.

The family of Ludmilla "Ludy" Birkel created this Life Tributes page to make it easy to share your memories.

Ludmilla &quot;Ludy&quot; Birkel, 90, of David City, passed away on October...

Send flowers to the Birkel family.