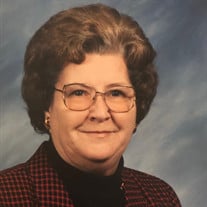 Lucille F. Alt, 87, of Shelby, passed away on Monday, November 4, 2019 at the Ridgewood Rehabilitation and Care Center in Seward. Memorials: Sacred Heart Catholic Church or the Shelby Senior Center. Lucille was born on November 2, 1932 in David City to Joseph and Marie(Voboril)Palik and grew up on a farm seven miles straight south of David City. She attended the District 58 country grade school and then four years at David City High Public High School, graduating in 1950. After graduation, she taught for one year at the Pleasant Grove Country School. She married Maurice Alt on January 23, 1951 at St. Mary's Catholic Church in David City and they were parents to five children. They lived on the farm northeast of Shelby until 1994, when Maurice passed away. Lucille then moved into Shelby. She was a member of Sacred Heart Church, St. Anne's Guild, American Legion Auxiliary and the Shelby Project Club. Lucille was a drapery seamstress for 40 years and had her own business, Lucille's Custom Draperies. She was on the start up committee for the Shelby Senior Center and enjoyed working there for many years. She enjoyed her family, reading, playing Bridge and going to auctions, looking for antique glassware. Lucille is survived by her children: Bruce(Lea Ann) of Waverly, Linda Wentink of Seward, Steve(Wandee) of Lake Hills, TX, and Kevin of David City. She is also survived by 10 grandchildren and 24 great-grandchildren, with one more due in February, and one brother, Vic Palik of David City. She is preceded in death by her parents, her husband Maurice in 1994, son, David in 2011, sister, Edith Alt on October 20, 2019, and brothers, Jerome and Dennis Palik.

Lucille F. Alt, 87, of Shelby, passed away on Monday, November 4, 2019 at the Ridgewood Rehabilitation and Care Center in Seward. Memorials: Sacred Heart Catholic Church or the Shelby Senior Center. Lucille was born on November 2, 1932 in... View Obituary & Service Information

The family of Lucille F Alt created this Life Tributes page to make it easy to share your memories.