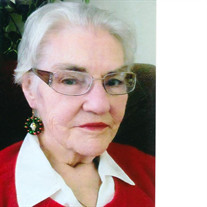 Lucile Lukassen, 96, of David City died Tuesday, December 19. 2017 at St. Joseph's Villa in David City. IN LIEU OF FLOWERS AND PLANTS: Memorials to Family Wishes Private family burial at a later date. Lucile was born on September 6, 1921 at David City, Nebraska to David and Jeanette (Neal) Gillespie. She attended David City Public Schools, graduating from David City High School in 1936. She was a member of St. Mary's Catholic Church and PCCW and the VFW Auxiliary. Lucile married Francis Lukassen on October 19, 1943 in Lincoln, Nebraska. 8 children were born to this union. Lucile worked as a bookkeeper for several different businesses in David City during her lifetime, she even worked for three different establishments at one time. She also worked as at JC Penny, as a Grill Cook and as a foreign sales secretary at Dale Electronics. She enjoyed playing the piano and singing hymns, rocking and cuddling babies, and crossword puzzles. Her family was very important to her and she loved to cook for everyone when they got together. Lucile is survived by her children: Doris(Allen) Shambrook of Lincoln, Tom (Judy) Lukassen of Kenosha, WI, Jane (Bernard) Buresh, Linda (Dick) Ronkar, Ted (Jeanie)Lukassen all of David City, Kathy (Jeff) Martens of Rising City and Lori (Rick) Bock of David City. 24 Grandchildren, 41 Great-grandchildren and 4 Great-great-grandchildren. Sisters-in-law; Sally McLaughlin and Dorothy Gillespie both of David City. She was preceded in death by her parents, her husband, Francis in 2009, Son and Daughter-in-law: John and Donna Lukassen in 1990, 2 brothers: Bob and Roy Gillespie; 6 sisters: Agnes Gores, Dalyes O'Neil, Mildred Bauer, Rose Gillespie, Jane Rech and Doris Glatter.

The family of Lucile Lukassen created this Life Tributes page to make it easy to share your memories.

Send flowers to the Lukassen family.