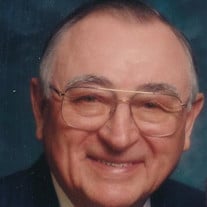 Louis J. Woita, 96, of David City died Tuesday, July 4, 2017 at St. Joseph's Villa in David City. Louis was born on September 23, 1920, on the farm in rural Saunders County to Joseph and Anna (Egr) Woita. In his younger years, he did custom farm work, driving stock and grain trucks back and forth to Omaha. Louis served in the US Army from 1942 until 1946 as a Tech Sergeant. After his discharge, he worked for at time in a local grocery store and in new home sales until he was offered a job at Sack Lumber. He worked his way up at Sack Lumber and after 40 years service, he retired as manager in 1988. On May 14, 1946, he married Lorene Jambor at Ss. Cyril and Methodius Church, Plasi. 7 Children were born to this union. He was a member of St. Mary's Church, and also belonged to the Kregger Legion/VFW Post in David City. He was in one of the original Acolyte Classes and also helped to set up the Perpetual Adoration program at St. Mary's, in 2000. Louis was a man of faith. He prayed his rosary daily, had a weekly Holy Hour and was very active in church activities including the Cursillo Movements, acolyte , serving as Grand Knight of Tihen Council 1717 and a 4th Degree Member. He was referred to as a pillar in both the David City community and St. Mary's Church. He was a leader in the Jaycees and belonged to Sertoma Club. Louis is survived by his wife, Lorene, Daughters: Kathy(Doug)Jones of David City, Barbara(Bob)Goodman of Sarasota, FL, Patricia(Bill) Westlund and Mary(Doug)Roberts both of Lincoln. Sons: Paul(Bridget) Woita of Lincoln, Jim Woita of Valparaiso and John Woita of David City. 9 Grandchildren and 7 Great-grandchildren, many nieces and nephews. He was preceded in death by his parents, two brothers: Joseph(Joey) and William Woita, daughter-in-law: Susan Kennedy-Woita and sister-in-law, Ella (Focher) Woita.

Louis J. Woita, 96, of David City died Tuesday, July 4, 2017 at St. Joseph's Villa in David City. Louis was born on September 23, 1920, on the farm in rural Saunders County to Joseph and Anna (Egr) Woita. In his younger years, he did custom... View Obituary & Service Information

The family of Louis J Woita created this Life Tributes page to make it easy to share your memories.