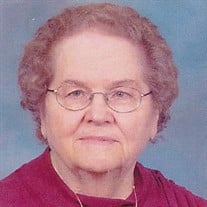 Loretta J. Tejral, 83, of Brainard died Friday, January 20, 2017 at David Place in David City. Memorials: Family Wishes Loretta was born on October 31, 1933 to Joseph and Flora (Navratil) Vondra on the farm in Seward County, Nebraska. She attended local schools to high school graduation and went on to earn a Teachers Certificate from Concordia. She taught in the local rural schools for several years. Loretta married Donald Tejral on July 26, 1955 at Dwight Assumption Catholic Church. Seven children were born to this union. Loretta was a member of Holy Trinity Church and the PCCW. She was also involved in the Brainard Quilters, enjoyed playing bingo and the occasional casino trip. She like to bake, and her specialties were kolaches and rosettes. She was an avid reader and worked crossword puzzles. She loved to draw and sketch, spend time with her grandchildren, work in her garden, and was someone who could always make the best out of an adverse situation. Loretta is survived by her children: Denise (Butch) Rorabaugh of Winthrop, Iowa, Bruce (Lorene) Tejral of Dwight, Alan (Tammy) Tejral of Brainard, Duane (Diane) Tejral of Dwight, Cheryl (Ron) Bartek of Valparaiso and Loran Tejral of Grand Island. one sister, Kathy (Bob) Tyler of Lincoln, 12 Grandchildren: Adam Tejral, Joe Rorabaugh, Jesse Rorabaugh, Austin Tejral, Kody Tejral, Wendy Janak, Audrey Rorabaugh, Jacki Rorabaugh, Erin Tejral, Sammie Tejral, Kristine Tejral, and Kourtney Tejral. 7 Great-grandchildren. A host of special friends that included Bev Lambrecht, Carrie Spatz and Margaret Pecha. She was preceded in death by her parents, her husband, Donald in 1999, son Greg in 2012, and grandson, Christopher Kastl.

The family of Loretta J Tejral created this Life Tributes page to make it easy to share your memories.

Send flowers to the Tejral family.