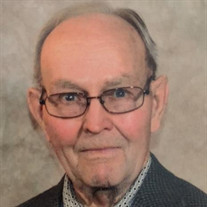 Loran H. Hoeft, 93, of David City, formerly of Ulysses, died Saturday, July 9, 2016 at St. Joseph's Villa in David City. Memorials: Ulysses Community Center or Immanuel Lutheran Church Loran Herman Hoeft was born on July 16, 1922, on a farm near Ulysses to Herman and Mattie(Buck)Hoeft. He was baptized on August 6, 1922 and later confirmed on May 31, 1936 at Immanuel Lutheran Church near Rising City. On February 20, 1949 he was united in marriage to Grace M. White at Immanuel Lutheran Church. Five children were born to this union. Loran served his country in the US Army from January 26, 1943 to December 14, 1945. He served in the European Theatre, Germany, France, Austria, Belgium and England. He was a member of the 546th Anti-Aircraft Batter D, General George Patton's 3rd Army. After the war, he returned to the farm in the Ulysses area. He served on several boards, including: Immanuel Lutheran, Ulysses Farmers Co-op, Ulysses Township, School District #31, Community Club, Ulysses Youth of Yesteryear, Ulysses volunteer fireman, Township Cemetery, Village Board, and American Legion Post #125, David City. Growing up he was the church janitor and later the cemetery caretaker. He helped restore the Pioneer Cemeteries of Knauber and Grim, removing overgrowth, planting trees and mowing. He retired from farming in 1995 after 46 years and has since enjoyed his hobby of woodworking. Loran is survived by his wife, Grace, children, Ronald(Joyce) of LaVista, James(Nancy) and Verne(Paula) both of Omaha, Lora(Tracy)Mickley of Mankato, MN and Larry(Terri) of Garland. 14 Grandchildren and 8 Great-grandchildren. Sister, Florinda Christopher of Lincoln, Sisters-in-law:Evelyn Hoeft of David City and Beth Hoeft of Loveland, CO. nieces, nephews and friends. He was preceded in death by his parents, infant grandson, Matthew Hoeft, two brothers, Walter and Norval Hoeft, sisters: Gladys Osborne, Leona Uribe and infant sister, Rosa. Brothers-in-law. Howard, Burton and Morris White.

The family of Loran H Hoeft created this Life Tributes page to make it easy to share your memories.

Send flowers to the Hoeft family.