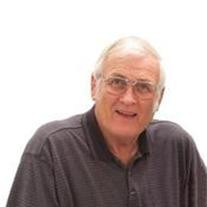 Lonnie L. Davis, 69, of David City, died Wednesday, March 14, 2012 at St. Joseph's Villa in David City. Funeral Services will be Saturday, March 17, 2012 at 11:00am in Grace Episcopal Church, Columbus with Rev. Ellie Thober officiating. Burial with Military Honors by Bellwood American Legion Post #327 to follow in the David City Cemetery. Visitation will be Friday, from 4-7pm at Chermok Funeral Home and Saturday, one hour before services at the church. Memorials: Boy Scouts of America; Grace Episcopal Church; or the Experimental Aircraft Association. Lonnie L. Davis was born on April 11, 1942 in Mahaska, KS to Luther and Irene(Junker)Davis. He graduated from Fairbury High School in 1960 and went on to earn a Bachelor of Science in Math and Science Education from Kearney State in 1965. He holds a Master Electrician Certificate. He earned an air frame mechanics license. Lonnie taught math and science at David City High School for one year. He married Judy Semrad on June 26, 1966 at Holy Trinity Episcopal Church in Schuyler. Two children were born to this union. Lonnie entered the U.S. Air Force in 1966 and served stateside until 1968. He then taught math and science at Rising City High School for three years. Lonnie worked for Eschliman Electric before opening and operating his own electrical business(Landmark Electric/Construction) in the David City area for many years. He was invovled with Boy Scout Troop 268, serving as Scoutmaster for several years. He was a Prairie Winds District Unit Commissioner at large as well as a camp visitation committee member. He earned the Vigil Honor Order of the Arrow, completed the Wood Badge training course and received the Silver Beaver Award from Boy Scouts. He learned to fly while in high school and working at the Fairbury airport and had his own plane, a Piper J4 Cub, which he loved to use when time permitted. He had an airframe mechanics license. He built his home with his own hands in 1975. He was a member of the David City Volunteer Fire Department, a city council member for two terms, a member of the David City Airport Board, a member and Past President of the Experimental Aircraft Association CP 569 and member of chapter 80. He was also a member of the Bellwood American Legion Post 327. Lonnie enjoyed spending time with his grandsons, camping with the Boy Scouts, working outside and basketball and tennis. He is survived by his wife: Judy, Daughter: Melissa(Chad)Drueppel of Omaha, son: Matt(Rachelle)Davis of Lincoln, four grandchildren: Xander and Dominic Drueppel and Beau and Jack Davis. One brother; Jerry(Carolyn)Davis of Brighton, CO. nieces and nephews. Lonnie was preceded in death by his parents and one nephew, Paul Lockner.

The family of Lonnie Davis created this Life Tributes page to make it easy to share your memories.

Send flowers to the Davis family.